From the RuneScape Wiki, the wiki for all things RuneScape
Jump to: navigation, search
Scorpion (built)Scorpion (armed)? (edit)? (edit) 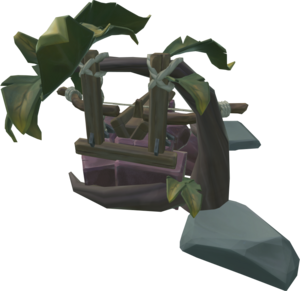 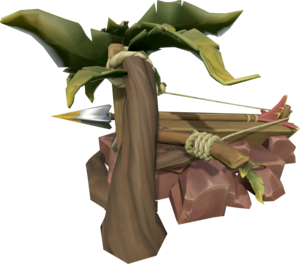 The scorpion is a large camouflaged device used in Big Game Hunter that is used to fire poison-tipped spears at any dinosaur located within the encounter. At least one scorpion must be built and armed before the pressure plate can be baited. A warning will be issued if all three scorpions are not yet built; however, this warning can be toggled off (Option 2 will toggle off the warning).

The scorpion is constructed by using one set of jungle logs and one vine - both of which are materials which may be obtained with the instanced encounter - on one of three piles of rubble surrounding the pressure plate located within the centre of each encounter. Once built, it can be armed with a variety of poison-tipped wooden spears]]; either sky-blue, golden, or phantasmal. In each Big Game Hunter instance, the dinosaurs are weak to a random type of poison. Hitting them with a spear tipped with the poison to which they are weak deals 30,000 damage. Hitting them with spears tipped with the other types of poison deals 15,000 and 7,500 damage, respectively. See Big Game Hunter/Strategies for optimal hunting strategies.

Building and arming the scorpion each take 6 seconds, but can be reduced to 4.2 seconds each when the player unlocks quick traps from the Hunter Mark Shop.

This information has been compiled as part of the update history project. Some updates may not be included - see here for how to help out!
Retrieved from ‘https://runescape.wiki/w/Scorpion_(Big_Game_Hunter)?oldid=35586683’
Categories:
Hidden categories: