From the RuneScape Wiki, the wiki for all things RuneScape
Jump to navigation Jump to search
This article is about the weapon used by Bandos in the world event The Bird and the Beast. For other scarecrows, see Scarecrow (disambiguation).

The Scarecrow was a huge weapon found atop Bandos's Tower near the Goblin Village, which the god of war, Bandos, constructed with the intent of using it to kill the god of justice Armadyl.

Bandos' head diviner, Davosi, was in charge of the weapon's construction; Davosi stated that the weapon would "help Bandos become ruler of the gods". The Scarecrow was powered by divine energy, which Bandos and Davosi collected by sending out caravans to sites throughout Asgarnia and Misthalin. At the sites, the caravans utilised the skill of Divination to siphon energy wisps, creatures created from the Anima Mundi that were created as a result of Guthix's death.

Armadyl adopted similar tactics, building a similar weapon known as "the Divine Focus". At the end of the battle, the Divine Focus fired first due to the Armadyleans gathering more divine energy. The blast of divine energy decapitated Bandos, destroying his tower and the Scarecrow. 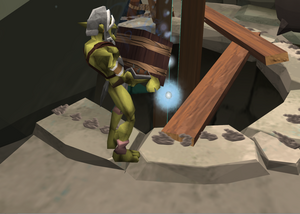 A goblin charges the Scarecrow with divine energy.

It is revealed that Davosi retreated to the Wushanko Isles to build a new Scarecrow, however The Tengu, The Exile, and The Memory stopped him.

This information has been compiled as part of the update history project. Some updates may not be included - see here for how to help out!
Retrieved from ‘https://runescape.wiki/w/Scarecrow_(weapon)?oldid=35671994’
Categories:
Hidden categories: