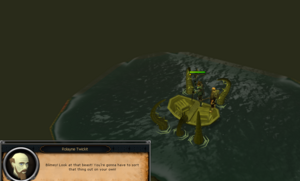 A player in Temple Trekking visits an area not visible on the World Map.

The scale theory is a confirmed[1] theory that the world of Gielinor as depicted in-game is not a literal representation of how the in-game lore and story represents the world. The scale theory allows RuneScape lore to be interpreted in ways that are not constrained to the limits of the game.

The fictional universe of RuneScape that is suggested to exist is in essence scaled down to be far more reasonable to manage in terms of video game development. Filtering out details not necessary to the gameplay or story is common practice as a means of showing off the most important, most relevant content to the player. For example, although the city of Varrock is apparently no larger than a small town, in-game text suggests it as a sprawling capital city with thousands of inhabitants. Similar examples exist with Falador, Ghorrock, and Senntisten, which in canon are large enough to house 80,000, 10,000 humans, and over 50,000 people in a single district, respectively[2][3][4], when they are clearly too small to house that many in the game itself. It would not be reasonable for the developers to include every citizen and locale as a means of recreating the much larger Varrock that is implied to exist in the game's story. Thus, a scaled down version is presented instead for practicality purposes.

Locations not on the World Map[edit | edit source]

The scale theory is not only used to shrink down the world to a manageable size but to also add new locations on top of existing ones without taking up physical space on the World Map. Examples include Temple Trekking encounters which show locations implied to exist in the swamps of Morytania but cannot be accessed through any other means. Another example is the Ratcatchers Mansion which is implied to be located near Ardougne but does not appear on the map either. The only way to reach the mansion is through reading directions from Jimmy Dazzler.

The world maps and locations of RuneScape 3 and Old School RuneScape while similar have some significant differences. The scale theory serves to reconcile the differences between both world maps. Both games are considered to share the same canon, but they have different interpretations of the same fictional universe.[5] For example, in The Branches of Darkmeyer, it is Vanescula Drakan who kills Ranis Drakan, but in Old School RuneScape's A Taste of Hope, it is the player who faces and kills him.