From the RuneScape Wiki, the wiki for all things RuneScape
Jump to: navigation, search
Scabaras mask? (edit)

The Scabaras mask is a mask that looks like Scabaras. It can be obtained as a hidden reward after the Diamond in the Rough quest in the Scabaras tomb.

You can find it by going into the Kalphite Nursery, then taking the tunnel to the east, then entering the room that you fell into during the quest (go all the way east to enter the room). There is a crack in the floor you can mine with level 80 Mining (can be boosted), which will open a fissure and grant 20,000 Mining experience (bonus experience is not used). Enter it and there will be the mask and also a sceptre called Was.

Wearing the Scabaras mask together with the Ankh while in the desert is one of the elite Desert Tasks.

Since 5 June 2017, it can also be used as a cosmetic override called Pantheon (Scabaras) Mask.

The Scabaras mask is also required for an emote master clue step along with the Asylum doctor's ring, the invitation box for the Impyrean Citadel is the nearest teleport to Maria who gives the ring, yet attempting to use the Invitation box within the Scabaras mask room will say that you cannot teleport there from an instanced area.

More than one of these masks may be obtained entering the fissure multiple times. 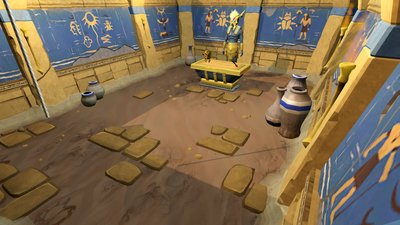 The tomb where the Scabaras mask is obtained
Retrieved from ‘https://runescape.wiki/w/Scabaras_mask?oldid=34379574’
Categories:
Hidden category: