From the RuneScape Wiki, the wiki for all things RuneScape
Jump to navigation Jump to search
Loading...
NormalGagged

Sarsaparilla is a fifteen-year-old girl involved in the Carnillean Rising quest. Her dream is to become an actress, although her parents want her to get married. She was invited by Sir Ceril and Lady Henryeta to stay at their mansion, although her family did not know it was a secret way to help their son Philipe get involved with girls. This failed, however. She later plays the damsel in distress (the distress being two wolf cubs disguised as dragons) in Philipe's quest. 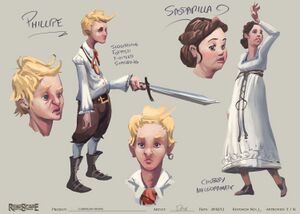