From the RuneScape Wiki, the wiki for all things RuneScape
Jump to: navigation, search
Sarcophagus? (edit)? (edit) 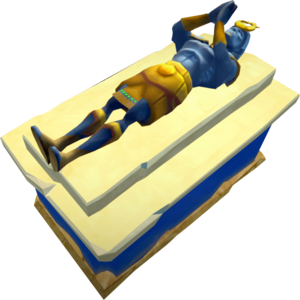 Sarcophagus are one of the three main objectives within Shifting Tombs that must be completed before the time limit of 5 minutes is reached. The number of sarcophagi to be opened varies from tomb to tomb.

Each sarcophagus is surrounded by panels depicting the 6 minor gods in the Desert Pantheon. Sarcophagi are found all over the tomb, primarily at the end of each path, although there may be a few that can be found at minor detours along the main path.

Sarcophagi opening count is shared within a group. Any member of a group opening a sarcophagus will count towards each individual player's objectives.

Players have a chance of finding small Menaphite offerings from looted sarcophagi, which may turn into medium size if the player has ring of Fortune luck or higher. There is also a 1/200 chance to loot a soul talisman from the sarcophagi, making it an extremely safe alternative for Ironmen compared to feline akhs.

Once a sarcophagi is opened, an icon

is placed on the map at its location.

This information has been compiled as part of the update history project. Some updates may not be included - see here for how to help out!
Retrieved from ‘https://runescape.wiki/w/Sarcophagus_(Shifting_Tombs)?oldid=35506918’
Categories:
Hidden categories: