From the RuneScape Wiki, the wiki for all things RuneScape
Jump to navigation Jump to search
The Old School RuneScape Wiki also has an article on: osrsw:Saranthium

Saranthium was a Saradominist city that sat upon the ruins of Senntisten, a Zarosian city and temple complex that extended as far south as the Exam Centre.

It is now part of the Varrock Dig Site, where players can excavate items for the Varrock Museum, including the old coin, old symbol, and ancient symbol. While the Varrock Dig Site is also important for the Archaeology skill, the artefacts excavated with the latter are mostly Zarosian in origin, indicating they come from Senntisten instead.

The location where Saranthium once prospered, now an archaeological centre named the Varrock Dig Site.

Before the God Wars, a Zarosian city stood where Saranthium was later built: Senntisten, the capital of the Zarosian empire. Being the most important and largest city of Gielinor and for that reason, the other gods envied it very much. Even after Zaros fell, the city survived the God Wars for 100 generations, until it finally fell to the combined forces of Zamorak and Saradomin.[1] Sometime after this Zamorak established himself as ruler, and ruled the city by 3740 of the Third Age. Later the Saradominist forces attacked the city, and by 3804 Senntisten was gone with Saranthium built above its eastern ruins.

Saranthium was an explendid city of the Third Age, marked by a very strong influence of Saradomin, having his symbols scattered almost everywhere, pots, jugs, urns, jewellery and even on the coins. Its beginnings were vibrant and successful, but despite its lively beginnings it was destroyed by unknown causes in the early fourth age.[2] It was a very religious city, similar to Falador, it was erected during the God Wars and was unfinished when it was destroyed, it still had some Zarosian markings under the soil and visible remnants of the Temple of Senntisten, and in the Fifth Age, excavations began on the area and many of the Zarosian markings were discovered, along with more information about Saranthium. 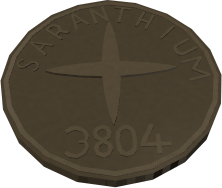 A coin that was used in Saranthium, recently found by the Museum of Varrock