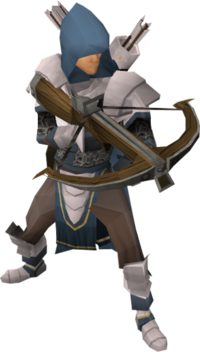 The Saradominist sharpshooter was a ranged-based monster fighting on the side of Saradomin in the Battle of Lumbridge. They dropped Divine tears. They could only be attacked by players who had sided with Zamorak.

Four Saradominist sharpshooters would appear at random times during the battle. After spawning, they would use Binding Shot against five Zamorakian forces, stunning them briefly and dealing large damage (800+ observed). They could be killed to prevent this from happening. Unlike the other Saradominist units, these monsters were aggressive to Zamorakian players, but would only hit them once with Binding Shot before moving on to target another Zamorakian unit or player. They only continued attacking if a player fought back. Using Anticipation as soon as they appeared on the battlefield could help prevent being stunned, and Freedom could be used to regain mobility if they did stun the player.

They gave double experience per kill.

Saradominist sharpshooters have joined the battle!