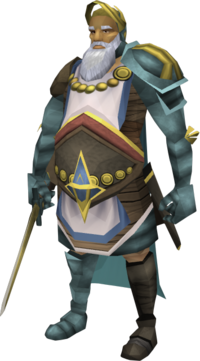 The Saradominist sergeant is the leader of a group of Saradominist bandits encountered during Wilderness Warbands. Players who challenge him should beware of his dangerous special attack, a variant of Meteor Strike. Like other warband leaders, when he is going to use it, he says "Someone will pay..." followed by "...and its You!" before hitting his current target for 5000 damage! He also has quite decent defence, so people with weapons that are below level 70 will have a somewhat difficult time hitting him.