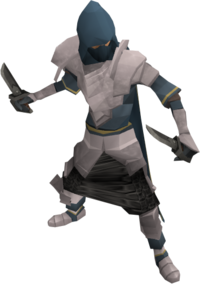 The Saradominist rogue was a melee-based monster fighting on the side of Saradomin in the Battle of Lumbridge. They dropped Divine tears. They could only be attacked by players who had sided with Zamorak.

The Saradominist rogue appeared at random. They would pickpocket five times, and return to their camp. Upon return, Saradomin's score would increase. They could be killed to prevent this from happening.

The rogues have arrived!