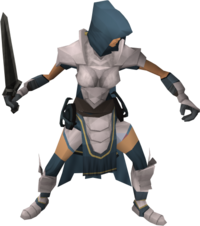 The Saradominist minelayer was a melee-based monster fighting on the side of Saradomin in the Battle of Lumbridge. They dropped Divine tears. They could only be attacked by players who had sided with Zamorak. The Saradominist minelayer appeared at random. They would drop five mines to damage Zamorakian forces, and return to their camp. They could be killed to prevent this from happening. Their mines did instant 2000 melee damage to all targets in a 3x3 radius, and a random damage towards enemy players. While they sometimes retaliated with melee, sometimes they would not attack and instead simply retreat from players. The number of mines they dropped depended on how many they had deployed. They gave four times the normal experience per kill.

A minelayer has joined the battle!