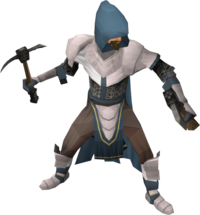 The Saradominist gatherer was a melee-based monster fighting on the side of Saradomin in the Battle of Lumbridge. They dropped Divine tears. They could only be attacked by players who have sided with Zamorak.

The Saradominist gatherer appeared at random. They would go to gather from five divine tear resource points, and return to their camp. Upon return, Saradomin's score would increase. They could be killed to prevent this from happening. Prior to be being attacked by a player, the gatherers had 50000 life points but their maximum health would lower depending on the combat level of the first player who attacks them.

In addition, this monster has a very rare chance to drop "the Powerful", "the Boundless" and "the Eternal" titles.