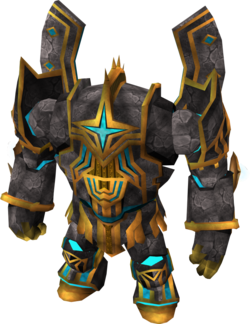 Saradominist colossi are extremely large and powerful golems serving Saradomin that appeared during the final week of the Battle of Lumbridge. Two votes to introduce them into the conflict earlier resulted in favour of the Saradominist champion and the Saradominist prideleader, in that order.

They could be found standing by the entrance to Saradomin's camp, regularly bombarding Zamorakian units based on a percentage of their health, to great effect. They use a mix of high-hitting and accurate long ranged attacks and stomp on their target when it is at their feet. Up to two of these units may spawn at once, due to a previous buff from a vote. Defeating one gives the player 6x their multiplier in divine tears. Players who aid in killing a colossus are also rewarded divine tears.

Like all special units, they do not retaliate against players unless they are not currently under attack or are attacking any other target.

This information has been compiled as part of the update history project. Some updates may not be included - see here for how to help out!
Retrieved from ‘https://runescape.wiki/w/Saradominist_colossus?oldid=35633398’
Categories:
Hidden categories: