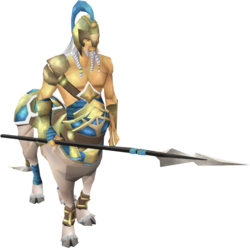 The Saradominist champions were centaurs that fought at the Battle of Lumbridge. They had a 50% chance of spawning in place of a normal troop, and each time one spawned, there was a 50% chance of another spawning with it. When killed by Zamorakians, they gave twice the amount of divine tears as normal troops. They could be healed for 5% of its max life points at the cost of 5 divine tears by Saradominist players, and they likewise healed Saradominist players in range by 50 life points every 2 seconds.

Unlike human combatants, champions did not switch focus unless their target was dead, making it safe to attack them. They gave twice the experience gained from killing normal human combatants.

False Saradominist Champions may be seen in Shattered Worlds.

Originally, there was only one champion in the battle at a time, however after one of the votes, there were as many as six champions on the battlefield at any one time. Mod Raven has said that after the vote, there were only supposed to be two champions at a time, and that having more than 2 champions was a bug.[1] This was later fixed.[2][3]

Mod Stu had stated that the Saradominist champion was Bree, a bodyguard of Commander Zilyana, and that he left Saradomin's Encampment in the God Wars Dungeon in order to fight Zamorak's Kinshra and demon troops in elite centaur armour.[4] Mod Raven later claimed that he was mistaken, and that they are in fact, not Bree.[source needed]