The Saradomin flag is a large blue standard bearing the symbol of Saradomin, attached to a long wooden pole. It plays a key role in Castle Wars. It is kept on the 3rd floor[UK]4th floor[US] (top floor) of the Saradomin castle. Its counterpart in the opposing team is the Zamorak flag.

If captured, the player doing so will automatically switch his current weapon and shield with the standard, which is held with both hands. Players can attack with the standard, but it is very weak weapon with a slow attack speed. If a player with the standard is killed, the standard will be dropped on the ground, allowing it to be taken by members of either team. The abilities Barge, Escape and Surge cannot be used while holding the flag. 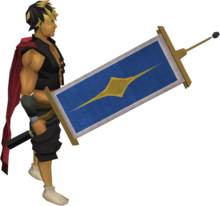