From the RuneScape Wiki, the wiki for all things RuneScape
Jump to navigation Jump to search
The Old School RuneScape Wiki also has an article on: osrsw:Santa Claus
This article is about Nick's normal persona. For his Fremennik alter ego, see Thorvar Crittersmash.
Santa ClausFather Christmas, Nicklaus 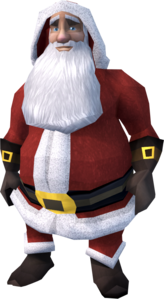 Santa Claus has two different backstories, one that was initially explained in the 2008 and 2009 Christmas events, and one provided by the The Queen and the King storybook found in Yeti Town.

Around winter time, Gielinor and the Land of Snow are close together, and people in Gielinor sometimes stumble through portals to the Land of Snow. While delivering presents in around approximately year 124 of Fifth Age, the young human Nicklaus stumbled through a portal and found himself in the Palace of Snow's garden, interrupting a snowball fight between some snow imps and Lumi, the youngest ice sprite princess. Lumi spotted Nicklaus and approached him, and they then spent time together and became close. Eventually, Nicklaus had to return to Gielinor, but Lumi gave him some of her best magical flying reindeer before he left.

A year or so later, Nicklaus returned, and this time asked for Lumi's hand in marriage. While marriage between ice sprites and humans is usually frowned upon, the ice sprite royalty allowed the marriage to go ahead because of how much Lumi loved Nicklaus. Shortly after they were wed, Lumi and Nicklaus had a child together, who they named Jack Frost. Nicklaus and Lumi spent a decade of marriage together, until Lumi was chosen to take the throne as the Queen of Snow. Lumi and Nicklaus' duties as Queen of Snow and Santa Claus began to take up more and more of their time, and the fact that ice sprites age more slowly than humans meant that Nicklaus was getting older much faster than Lumi. As a result, they decided that it was best for Nicklaus to leave the Land of Snow, leaving Jack Frost to grow up without his father. Nicklaus's absence and Lumi being busy with her duties caused Jack to become rebellious.

The King of Roses was a lover of poetry and loved wandering the lush landscapes leaving his poems around. One of these poems were found by Lumi, the Queen of Snow, who was the winter aspect of the King of Roses, she fell in love with the author, although she could not find him, no matter how intensely she searched. She instead left behind messages for the King to find, and their love bloomed through their exchange of letters and poems; never knowing, that they were the same person.

At some point the god Guthix came to Renmark and was astonished by its beauty, but Guthix discovered a hidden threat to Renmark near the planet's core, a corruption called Mur. Guthix used the Elder sword to try and remove Mur, but accidently shattered the whole planet. This event caused the seasonal aspects of Renmark to be broken apart with the Queen of Snow being split into her four different aspects. Guthix salvaged as many pieces of the planet as he could, and eventually connected them with Gielinor through unknown means. The King of Roses left his fragment, the Land of Glades, a land of everlasting summer to live with the Queen of Snow in the Land of Snow, the land of unending winter. He subsequently adorned thick red clothes to keep warm.

During the 2004 Christmas event, Santa appeared in numerous free-to-play and members cities, these being East Ardougne, Varrock, Falador, Catherby, and Yanille. He could usually be found along important roads or in town centres.

When spoken to, Santa would give players a yo-yo, a toy that only players who attended the event can receive. If players lost their yo-yo, they could obtain another by speaking to him again. If the player already had a yo-yo, he would just wish them a merry Christmas.

Following the event, Santa disappeared. If players needed a new yo-yo, they could obtain one from Diango in the Draynor Village market.

During the 2005 Christmas event, Father Christmas appeared at the gate east of Taverley, near Doric's house. When players were instructed to deliver a box of baubles to a person at the gate, they would find him there, although he was called "Hooded Stranger". 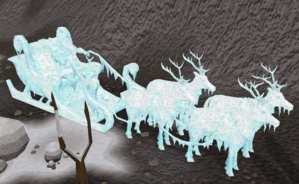 Santa Claus and his four reindeer frozen in ice.

In the 2008 Christmas event, his son, Jack Frost, froze him, his sleigh and his four reindeer. Usually, Santa Claus is supposed to have 8 reindeer, excluding Rudolph.

Players had to defrost him by lighting several logs around his sleigh. Once he was defrosted, players were awarded with the four pieces of the Santa suit.

Santa Claus is freed when players, wearing the Ghost costume, scare Ebenezer Scourge by pretending to be the Ghost of Christmas Yet to Come. If players wore the costume and talked to Santa Claus, he mistakes the player for a real ghost, but quickly realises that the ghost is the player.

For the 2010 Christmas event, Santa (badly) disguises himself as Fremennik called Thorvar Crittersmash and tries to bring Christmas to the Fremennik warriors fighting in Daemonheim. During the event, players had to collect items that Thorvar left in a dungeon when he was attacked by a "ferocious creature" (A heim crab named Salty Claws). According to Thorvar, he is a Fremennik, and Thok does not dispute this, claiming he is obviously a Fremennik as "he climbs through chimneys and into fireplaces, he is almost as strong as me". After completing the event, he teleported players to the Heimland Games and gave them a reward.

For the 2013 Christmas event, Santa Claus was kidnapped by San'tar Klaws, and is later freed due to the players intervention (a nice or naughty Christmas will work).

For the 2014 Christmas event, Santa needs the players help to construct and pull a giant Christmas cracker in the Lumbridge crater. This is achieved by travelling around the world and delivering presents for Santa every day and giving him the festive paper that he needs.

He is also in most major towns in the form of Thorvar Crittersmash, accepting donations for Oxfam. The rewards for this are the Oxfam present, 'the Festive' title and the Oxfam Reindeer Antlers.

During this event, he has gone missing along with the Queen of Snow and Jack Frost. With the aid of a snow imp, players attempt to find out what happened to them.

For the 2016 Christmas event, Santa needs the player to help with some of the old events in Santa's Christmas neighbourhood.

During the 2017 Christmas event, Santa has gone missing and the Queen of Snow is worried about his whereabouts. She asks the player to try and help to track him down. She suggests talking to Aubury, Doc, Orla Fairweather and afterwards Thurgo.

During the 2019 Christmas event, the player must help Santa track down his gifts for the Queen of Snow that he unintentionally distributed all over Gielinor.