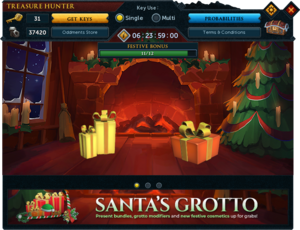 Santa's Grotto is a Treasure Hunter promotion that was first introduced on 25 December 2021.[1] Players were given the option to select between two sets of presents, with both the rarity and multiplier being represented by the colour (white, yellow, orange, red, or purple) and number of presents (one, two, or three) in each set. Upon filling the Festive Bonus bar at the top of the interface by using 12 keys, players are given three bonus options from which they can choose. The promotion began with the meter filled to 11 of 12 for all players, awarding the first bonus after opening only one present.

The three available bonuses include the following. The bonus inside a category is randomised.