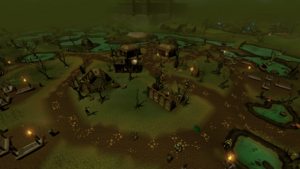 The disease is said to have spread to Mort'ton via a "dark wind" that emanated from Sanguinesti. The people of the village began acting abnormally shortly after the pestilence arrived. Despite the efforts of Herbi Flax, a local scientist, no cure was discovered, and the village rapidly fell into ruin.

The first symptom of the affliction is a depression that gradually escalates to hostility and violence. Those completely overtaken by the disease lose most of their mental capacity, wandering aimlessly and attacking any non-infected that they encounter. Furthermore, corpses exposed to the disease are re-animated via unknown magicks, leading to the creation of shades. 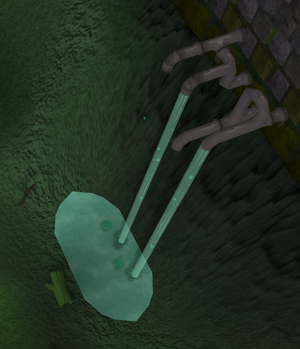 The Sanguinesti Affliction was first documented in the recent Fifth Age. Although the disease is said to have originated in Sanguinesti, it does not appear to be present in Meiyerditch.

The disease is believed to have first affected Mort'ton recently. In the Year 23, Lord Lowerniel Vergidiyad Drakan began a campaign to reclaim most the land inhabited by settlers that had first travelled to the region in the year 1777 of the Fourth Age. Like most of these settlements, such as Port Phasmatys and the Lordship of the North Coast, Mort'ton appears to have been forced to give blood tithes to avoid being destroyed by House Drakan. Upon the arrival of the Affliction, however, the blood of the townspeople became distasteful, if not poisonous, to the vampyres, causing them to end tithing in the village.

There is some speculation as to why the affliction occurred. It is possible that Lord Lowerniel Vergidiyad Drakan, the vampyre overlord of Morytania, deliberately released the plague as part of his attempted extermination of Morytania's Saradominist settlers. Others theorize that the disease may have originated from the sewage of Castle Drakan. The sewage seems to contain strange chemicals, possibly from the vampyre's human experimentation or from the daeyalt ore refinement facilities beneath the ghetto. Still, it is possible the disease came on naturally, escaping the ghetto by pure chance.

Due to the affliction's rarity, it has been studied very little, and most of what is known comes from those that have witnessed its effects, as well as the writings of the scientist Herbi Flax.

An Afflicted affected by the disease.

The Sanguinesti Affliction is rare, though its effects are capable of destroying civilizations in a matter of weeks. The plague has few dangerous physical effects, although it makes the victim sluggish and often brings their skin to a pale green. Nearly all of the disease's effects focus primarily on the mind.

According to the Diary of Herbi Flax, the plague begins very subtly, causing the victim to become depressed and somewhat unresponsive. Others simply begin to slip, staring at the sky in groups and speaking little. This depression escalates to the point of rage, the victim becoming aggressive and confused. Within a week, the victim succumbs fully to the disease, reducing them to an zombie-like state. Speaking nonsense, they attack anyone they see and eat any victim they can overtake. This insanity will push even further, the victim losing even the most base of survival instincts.

The plague also affects the dead, hinting at a supernatural origin or influence. Even the dead in the catacombs beneath Mort'ton were affected, reviving the spirits as mindless shades.

A temporary cure for the Sanguinesti Affliction was actually discovered before it fully took Mort'ton. Herbi Flax, wanting to save Mort'ton before the plague took hold, invented Solution 194, a mixture of ashes, marrentill, and harralander. This solution was capable of controlling the effects of the affliction for several minutes, but its lack of long-term effectiveness made it essentially useless. Looking to improve this, Flax developed a number of additional cures, including Solution 198. This medicine, containing snake weed, proved even less potent than 194.

Herbi Flax's final attempt at a cure was Serum 207, a basic mixture containing tarromin and ashes. This cure offered longer relief than any other mixture, but a lack of supplies in the now nearly empty Mort'ton made mass-production impossible. Both Herbi Flax and his assistant, Liornish Stemplehair, succumbed to the disease before they could find a permanent cure.

During the Shades of Mort'ton quest, the player discovers a permanent cure for the affliction. This time, the serum 207 contained sacred energy from the temple of Mort'ton. This so called serum 208 offers a permanent cure. Despite this, Mort'ton's isolation has left it virtually unsavable on a large scale, and today remains infected and ridden with shades and afflicted.

The shades who wander Mort'ton today, can be saved by burning them with special pyre logs. These logs contains sacred oil. Which is made from olive oil with the same sacred energy from the town's temple. Burning the shades with these special pyre logs, will cure the spirit from the affliction, and release the soul from their afflicted homeplace.