From the RuneScape Wiki, the wiki for all things RuneScape
(Redirected from Sanguinesti Region)
Jump to: navigation, search
The Old School RuneScape Wiki also has an article on: osrsw:Sanguinesti region 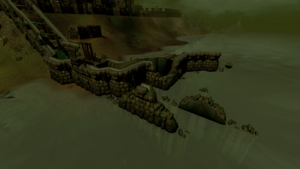 "The Great Vyre Wall", which separates the Sanguinesti Region from the rest of Morytania

The Sanguinesti region (pronounced "Sang-gwin-nest-ee"[1]) is a large area found in south-east Morytania. It consists of two cities, Darkmeyer and Meiyerditch, which merge together to form a conurbation. Darkmeyer is located to the north of the region. Darkmeyer is the only known Vampyric settlement on Gielinor, although it also contains a small Werewolf population from Canifis concentrated within the lower tier of the city. In the south is Meiyerditch, a sprawling ghetto which houses the area's human population. 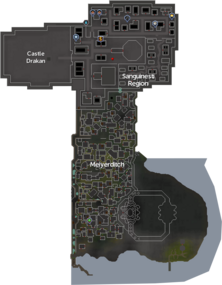 The Sanguinesti region is ruled by Lord Drakan and his family. The Vampyre juveniles are used as guards, and the Vyrewatch as a blood-harvesting police force, who also keep the populace under control. The humans in Meiyerditch are treated as serfs, regularly being drained of their blood supply and being forced to serve their Vampyric masters.

Castle Drakan features in the third Myreque quest, The Darkness of Hallowvale, in which the player must sketch the castle from three different locations, so the Sanguinesti Myreque can observe the area and possibly find a way inside. The player must also fight Vanstrom Klause on the walls of this castle, though it is impossible to kill him.

The area is separated from the remainder of Morytania through the Vyre Wall which acts to enclose the human populace of Meiyerditch from escape and to separate the two races from each other, thus effectively protecting the Vampyres of Darkmeyer. The wall extends around Meiyrditch - where regular patrols of Vyrewatch roam - and stretches between Darkmeyer and Meiyerditch. The wall surrounds Castle Drakan and its adjoining Darkmeyer, where it is heavily reinforced.