From the RuneScape Wiki, the wiki for all things RuneScape
Jump to navigation Jump to search
SanchezSanchez the Cleaner? (edit)? (edit) 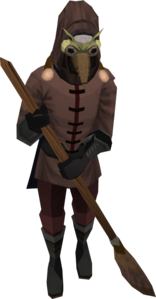 Sanchez is a cleaner found in the Mourner Headquarters during and after Within the Light, alongside his brother Scotty. Although he and Scotty wear mourner gear like the Prifddinas Death Guard, Scotty reveals Sanchez and himself are just human cleaners hired by them, and are completely unaware of the Death Guard's activities or true nature as elves. According to Sanchez, he and Scotty formed a group global known as the S&S Cleaners and used to work for Mandrith, who paid them 76,000 coins per hour. They got their current job after he relocated from the Wilderness Volcano to Edgeville.

He and his brother have already left the HQ by the time of the Ardougne Revolution, and as such he cannot be found after progressing past a certain point in Plagues' End.

He could originally be found inside one of the three Bounty Hunter waiting rooms, alongside Scotty and Charley, but was removed alongside the minigame.