From the RuneScape Wiki, the wiki for all things RuneScape
Jump to: navigation, search
This article is about the NPC. For the hat, see Salty claws hat.

Salty Claws is a Heim crab that stole Thorvar Crittersmash's hat, and he is wearing it on his head. He appears in the final room of the dungeon in the 2010 Christmas event. To catch him, the player needs to watch when the heim crabs pop out of the fishing spots, see which one is wearing a Santa hat, and click on him.

After the player has attempted to catch him five times, he will end up in Thorvar's bucket, and can be taken back to Thorvar. For an unknown reason however, a few players only succeed in capturing him after six attempts instead of the normal five. At the end of the quest, because the hat cannot be extracted from the crab, Salty Claws turns into a Salty claws hat that the player can wear. 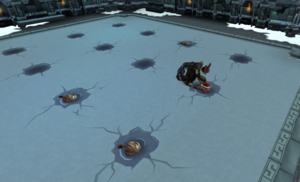 Scooping Salty into a bucket.

The message of the week just before the 2010 Christmas event hinting about Salty Claws.
Retrieved from ‘https://runescape.wiki/w/Salty_Claws?oldid=35582236’
Categories:
Hidden categories: