From the RuneScape Wiki, the wiki for all things RuneScape
Jump to: navigation, search
Sagaie? (edit)

Sagaies are throwing spears that require level 72 Ranged to wield. Players can make them using items gained from the Jadinko Lair. Sagaies are 1-handed and, thus, can be equipped with a shield to give better defensive bonuses, although they do not currently have an off-hand counterpart. Moreover, Ava's devices do not work with sagaies, and most of the spears thrown will be lost. It is the fifth most powerful javelin-type weapon, behind Morrigan's javelin, Vanquish (ranged), Sunspear (ranged) and Superior Morrigan's javelin.

A player attaches a mutated vine to a sagaie shaft.

They are made with a Fletching level of 83 or higher by heating straight roots on a firepit to make hardened straight roots, using a knife to fletch these into sagaie shafts and then attaching mutated vines to the shafts for 40 Fletching experience per shaft (5 are made per 2 game ticks, or 100xp/tick, and you can queue up 50 using Make-10).

This makes the actual fletching process one of the fastest ways to train fletching in RuneScape only behind dragon darts, though this speed may be deceptive given the amount of time needed to prepare the untradeable sagaie shafts. 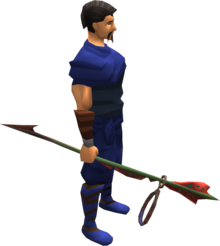