Sacred metal fragments (The Bird and the Beast)

Sacred metal fragments are items dropped in The Bird and the Beast world event. 1000 of them can be combined with rare equipment components dropped in the same manner to create cosmetic equipment overrides.

During The Bird and the Beast, they are rewarded for killing NPC soldiers, destroying or completing building, and when convoys disappear (whether this was due to failure or success), in quantities of 10 to 100. They may also be received while building, repairing or tearing down a building (5 at a time), while siphoning energy for your convoy (6 at a time for small, normal and large wisps, 8 at a time for enriched wisps) and while healing convoy NPCs (4 at a time). It is still possible to receive sacred metal fragments after your energy for the day has depleted. When you receive sacred metal fragments, one of the following messages appears in the chatbox, depending on your actions:

They are used to create the following overrides: 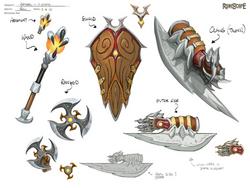 Concept art of the Armadylean overrides.