From the RuneScape Wiki, the wiki for all things RuneScape
Jump to: navigation, search
Sacred clay shield (melee)? (edit)

The sacred clay shield (melee) is a degradable shield that primarily defends against melee attacks. It is obtainable from the Stealing Creation minigame for 200 Stealing Creation points, and as with the magic and ranged shields requires a Defence level of 65 to equip. It can be transformed into the magic or ranged versions and vice versa at no cost. It currently does not lose charge in combat.

It provides the same armour rating as a Third-age kiteshield. 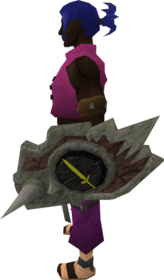