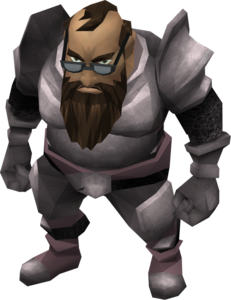 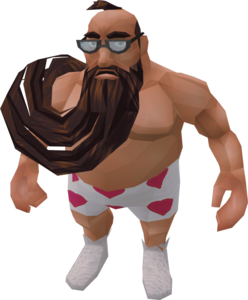 Rupert the Beard, initially known via the Drain Pipe,[1] is a friendly yet odd dwarf that can be found at the tower south of the Mind altar. He utilizes a dated form of speech similar to Sir Tiffy Cashien, although he shows contempt for the latter.[2][3]

Rupert was so named after his long beard, which grew after he unknowingly placed a small bottle of strong hair tonic in his helmet. As a result, he had to modify his armour with a special compartment for keeping it.[4][5][6][7]

When his good friend Winkin went missing while doing a delivery to Draynor Market,[8] Rupert set off to find him and found out that Winkin was last seen speaking to a witch before his disappearance.[9]

Eventually, his investigations led him to princess Miazrqa, a second cousin, twice-removed of the witch.[10][11] Unbeknownst to him, Miazrqa was promised a reward from her beforehand for his capture as Rupert was caught snooping around in order to find Winkin, something the witch didn't like.[12][13] After attempting to flirt with her to obtain information, he was tricked into the tower and gassed unconcious by the princess, whom took his armour and imprisoned him.[14][15][16]

The player manages to secures his release during the events of Grim Tales after recovering a lost pendant for Miazrqa, who agrees to free Rupert. He intends to continue his investigation with the help of the princess, whom offered assistance after expressing horror at Winkin's kidnapping.[17][18]