From the RuneScape Wiki, the wiki for all things RuneScape
(Redirected from Runefest 2016)
Jump to: navigation, search

RuneFest 2016 was the 6th annual RuneScape convention, and was held on 17 September 2016 at Battersea Evolution in London. It was announced on 8 July 2016 and had an Eastern Lands theme. 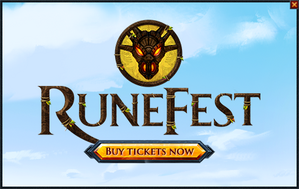 The in game popup advertising the event

Tickets to RuneFest cost £99 per person,[1] and tickets to the Night Before RuneFest party cost £25.[2] A combined ticket to both events cost £120. In contrast to previous events, tickets, hotel rooms, and flights to London could not be bought with bonds,[3] a change neither financially motivated[4] nor related to Shandong Hongda's potential acquisition of Jagex.

Attendees received a free drink, and had unlimited access to the bowling, dodgems, table tennis, pool tables, and arcade machines in the venue.

The event started at 10:00 on Saturday 17th September, and finished at 23:00 the same day. It was streamed live on RuneScape's Twitch channel, and recordings of the stage sessions were put up on RuneScape's YouTube channel after the event.

Livestream viewers could unlock the RuneFest Foo Lion pet by redeeming the code RFLiveStream2016 from Diango. 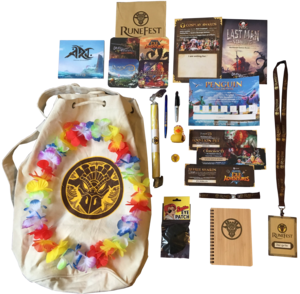 As with previous RuneFests, skilling chips were awarded for completing various activities around the venue. This years chips represented The Arc islands. 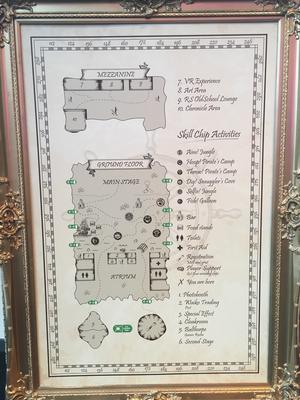 A map of the venue.

Entertainment acts, including actors dressed as fish on stilts, a troll, and a large One-Eyed Willy could also be found roaming the venue.

Players were able to purchase RuneScape-themed merchandise at the event.[5]

The after party featured fire dancers, a balloon drop, with prizes, and Beat A Maxx.