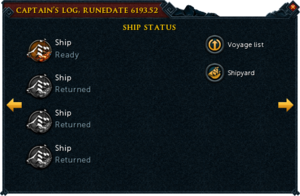 Runedate visible at the top of the interface.

The Runedate is an alternative date system, first viewable by players with the introduction of the player-owned port. It is shown at the top of the Captain's log interface.

The Runedate is an increasing decimal number, which shows the elapsed number of days since 27 February 2002 00:00 UTC, the date Jagex released the membership service for RuneScape. The Runedate is rounded down to two decimal places. It is used in several ways both in-game and on the RuneScape website.