The Runecrafting Guild is a guild that is located in the Runespan realm. As the name suggests, it contains many wizards and runecrafters who wish to continue their studies there, as well as the minigame The Great Orb Project. In addition, Larriar, the master of Runecrafting, is located there, keen to sell her cape to players with level 99 Runecrafting. Level 50 Runecrafting is required to enter, though this can be boosted. The guild is currently run by Wizard Elriss, an established member of the Guild who is researching the Stone of Jas. Apart from managing the Guild, she is also the shop's owner, selling goods in exchange for Runecrafting guild tokens. Elriss is not only the Guild's founder, manager, and store-owner, but also an esteemed magical theorist and researcher.

The Runecrafting Guild is closer to a research centre than a Guild, as wizards work together to create theories on Runecrafting. To wizards, this is probably the best place to research Runecrafting theories, as there are players helping them, special equipment and other wizards to discuss their point of view on a theory.

A player entering the Runecrafting Guild.

On 30 April 2012, the Runespan realm was opened to the public due to Wizard Finix's theories, where players may collect rune essence and siphon runes from esscreatures for the current highest runecrafting experience rates in the game. It can be played at any runecrafting level and may be accessed by selecting "Runespan" in the options when entering the portal to the Runecrafting Guild.

Within the centre of all three levels of the RuneSpan is what appears to be a single massive tower, which is actually the Runecrafting Guild. The tower can easily be spotted with an Orb of Oculus.

One of the main features of the Guild is a two-party minigame called The Great Orb Project in which players aim to collect as many of their orbs of their team's colour as possible by moving them towards the altar. At the same time, players must deter the other team's orbs from reaching the altar. The official world for this minigame is 66 (members). 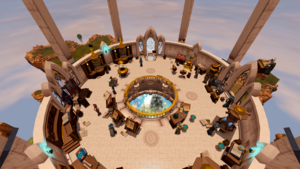 A detailed view of the inside of the Runecrafting Guild.

Wizard Elriss can also create an omni-talisman (for members) which enables players to access every altar with one talisman (provided they meet the respective quest and skill level requirements). In order to receive one, players have to show her one of each talisman or tiara (for each Runecrafting altar). She will also award them with Runecrafting experience for each (a total of 13,605 experience). She does not keep the talismans. This item is only available to members.

Wizard Korvak also sells and repairs Runecrafting pouches for members. For a more detailed look at his fees, see his article. 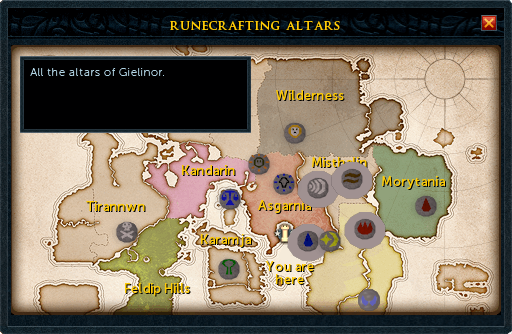 There is a map in the centre of the Guild, which may be used to locate all of the Runecrafting altars in Gielinor. To locate an altar, players must use a talisman on the map, or click on a talisman in their inventory while the map is open. Using the omni-talisman will reveal all altars on the map (except the Astral altar, which does not require a talisman to access).

The map is also interesting in that it does not show any unexplored, black areas like the world map of Gielinor does. However, the rune altar map may not be as accurate as the world map. The map is almost identical to the one Wizard Sedridor keeps in his chamber in the basement of the tower.

In an update, the Air altar was moved to its current location south of the Cooking Guild in Varrock. Previously, it was located to the south of Falador where one would nowadays find the Clan Camp.

The Rune Goldberg Machine can also be found in the Runecrafting Guild. It is a daily Distraction and Diversion that allows players to input runes in exchange for vis wax. Please see the money making guide for instructions on using the machine.

There is also a bank deposit box located beside the glass spheres around Wizard Vief.