The Great Invasion[1] was an attempted conquest of the mainland led by the Fremennik warlord Gunnar of the Mountain Tribe, which lasted from the year 42 to 62 of the Fifth Age. The Invasion originated in various Fremennik clan leaders' desire to increase their land holdings. These clan leaders then rallied support by appealing to the Fremennik belief that runecrafting belonged to the gods and urged their people to stop the "heretics" creating runes.[2][3][4] For this reason, the Invasion is sometimes considered a "crusade".[5]

The attacks were unsuccessful, although the kingdoms of Misthalin and Asgarnia suffered heavy losses under the weight of the brutal attacks. A further set of invasions were planned, but never occurred. Some of the raging Fremennik swore to protect the rune essence stolen from the wizards at all cost and came to live as The Untainted in the Mountain of Fire in the Wilderness.

The Discovery of Runes[edit | edit source]

In the last days of the Fourth Age, the Rune Essence Mine - a former resting place of the Stone of Jas - was discovered by a guthixian. The guthixian, realising that these stones could be mentally crafted into runes at altars around the lands which allowed humans to cast magic, brought the new discovery to the kingdom of Misthalin. Here, before a group of various civilians from the Misthalanian capital city of Varrock, the seer displayed simple tricks he could perform with the runes, such as creating a small gust of wind.

The remains of the Earth Altar, which fell into disrepair following the Invasion.

This discovery would mark the beginning of the Fifth Age, a time of massive progression.

The Spread of Runecrafting[edit | edit source]

Word of this new art of magic exploded throughout the human kingdoms, many pro-magic Fremenniks travelling further south and constructing altars in locations that would allow even untrained humans to craft runes. As magic became increasingly common and runes came into mass production, many in the Fremennik Tribe became outraged by its use. Humans in kingdoms such as Misthalin, Asgarnia, and Kandarin were able to use magic to their advantage. Now able to more adequately defend themselves against giants, goblins, and other hostile races, these kingdoms began to expand their borders and prosper.

For nearly 40 years most of humanity would prosper with the aid of runestones, with unrivalled strides in nearly every aspect of life. A great tower of wizardry was erected in southern Misthalin.

One year, the Fremennik experienced terrible droughts. Crops were failing and they struggled to feed everyone. Over time, many people came to believe that this was a punishment sent by the gods, and that Runecrafting was to blame for the gods' anger. The Fremennik clan leaders of the time had been looking for an opportunity to increase their land holdings, so they preyed on this fear. They rallied the commoners by claiming that the gods were angry at the "blasphemous" magical practices of the "heretics", the Runecrafters, thus giving them justification to expand and gain the land they craved.[3][2]

The Start of the Invasion[edit | edit source]

This call for expansion eventually materialised under the Fremennik warlord Gunnar. Gunnar, intent on stopping Runecrafting entirely, led a massive military force into the largely unclaimed woodlands south of the Fremennik Province, where the emerging nation of Kandarin was just beginning to solidify under the city of Ardougne.

Kandarin, despite being largely uninhabited, suffered immediate losses at the hands of the invaders. Pillaging and destroying those few settlements in the northern reaches of the kingdom, the Fremenniks were a cause of great concern in regions such as Misthalin, Asgarnia, and Crandor.

Intent on defeating any human nation supporting the use of magic, the Fremenniks advanced further east, making no secret of their mission. Their years in the bitter ice fields of the north served them well, allowing them, even in their great numbers, to pass over White Wolf Mountain relatively unscathed.

Once across White Wolf Mountain, the Gunnar's army was left with no significant geographical borders to cross, leaving Asgarnia to defend itself. Falador, at the time a fast-growing but still comparatively small city, was put to the test. The White Knights and Kinshra that protected the city, under King Raddallin, were able to repel the crusaders eventually, but northern Asgarnia suffered heavy losses under the attacks.

Within several years, the barbarians were already pushing their way into Asgarnia. Word of this was cause for great concern to any human settlement. Despite the massive retaliation against the Invasion by many governments, there were some in Misthalin and Al Kharid that felt that this new art was dangerous and that the Invasion were a justifiable course of action.

In the year 47, a large number of warriors trained in traditional combat took up arms against the Mage Training Arena, a facility in northern Al Kharid that had been built in the year 9. The Arena had been designed by the same mages that constructed the Wizards' Tower, its goal to prevent accidents and train those unskilled in magical arts.

The Arena, despite being protected by powerful guardians constructed of rune essence, was unable to stand against the attack. The Arena fell, creating much internal conflict amongst Misthalin and its neighbours. 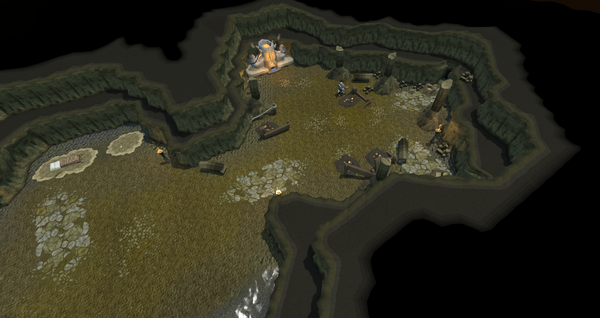 The remains of Camdozaal's main hall as they appear today.

The crusaders, unable to take Falador or reach southern Asgarnia, bided their time in the cold forests north of the city for years, pillaging small settlements and planning their next offensive.

The Imcando dwarves, a race of peaceful blacksmiths that lived within Ice Mountain north of Falador, were perhaps the greatest victims of the Crusades. Prior to the Fremenniks' arrival in Asgarnia, the White Knights had given the Imcando a number of fire and nature runes with which they could superheat ore, thus aiding the smithing process. The crusaders, hearing of this, launched a full-scale assault on the dwarves living on Ice Mountain in the Hall of Camdozaal. Untrained in the art of war, the Imcando were decimated and Camdozaal destroyed, their race forced to near extinction. Although a very small number were able to escape the attack, this would mark the end of the Imcando's prosperity.

The End of the Invasion[edit | edit source]

Despite launching many successful waves of attacks, by the early 60s the Fremennik Crusaders were dwindling from their years of combat. Despite this, they pushed on through Asgarnia, their eyes set on Misthalin and its capital city of Varrock.

With their numbers constantly decreasing and supplies becoming more and more difficult to obtain, however, the Crusaders found themselves in an increasingly dire situation. In the year 62, Gunnar, now considerably aged, led his people to the River Lum, where the Fremenniks decided to establish a settlement on the river's western side. Here they established Gunnarsgrunn, where they initially intended to re-amass their forces for a second series of attacks. The governments of Misthalin and Asgarnia, not wanting to immediately provoke them, held off any retaliation.

Eight years later, though, in the year 70, runecrafting was still at its peak, and the threat of a second series of Crusades had faded from the minds of most. This confidence was betrayed when the Wizards' Tower was burned down after a disagreement between the four groups in wizards in the tower, which was then blamed on Zamorakians in an effort to end Saradominist supremacy in the region. With the loss of most of the order and the destruction of many important tomes and artefacts, much of the knowledge of the origins of magic and many specific details were lost. 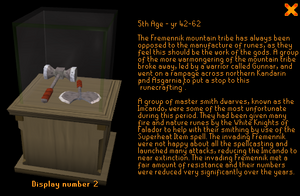 A display found in Varrock Museum describing the Invasion.

Today, almost 100 years later, the Fremennik's descendants continue to live peacefully in their village near the River Lum. Despite the towers reconstruction and Runecrafting's continued use, the tribe have yet to take further action, suggesting that their views have become less conflicting with their neighbours; some tribe members have even begun to live in cities such as Varrock.