From the RuneScape Wiki, the wiki for all things RuneScape
(Redirected from Rune salvage)
Jump to navigation Jump to search 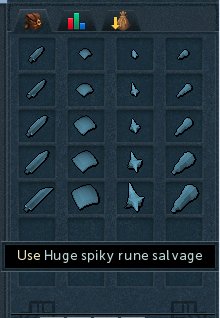 Salvage is a type of drop whose only function is to be alchemised or disassembled. Salvage cannot be used, equipped or broken down into ore with a spring cleaner. Salvage does not stack and can be traded. There are 120 distinct kinds of salvage divided into five sizes, six tiers, and four types in the format "size type metal tier salvage".

Salvage was introduced with the Mining and Smithing rework to replace most smithable equipment on drop tables, with a few exceptions such as arrows or bolts. Drop tables were altered by swapping out equipment for an equivalent salvage. This was to make smithing the best way to get metal equipment, rather than combat. Salvage is of the same tier as the replaced item (e.g. rune items have been replaced with rune salvage) and the type is the closest match to the item being replaced (e.g. platebodies have been replaced with plated salvage). For most salvage, the size corresponds to the number of bars that were required to make the item prior to the rework (e.g. 1 bar = tiny while up to 5 bars = huge). Halberds have been replaced with two huge salvages and Rune equipment is converted differently.

The seven tiers of salvage are named after the first seven Smithing metals (bronze - orikalkum). The tier indicates the base alchemy value of the item, and the amount of components it can yield from disassembly. There is no direct mechanical relationship between salvage and its associated metal - metals can not be made into salvage nor can the spring cleaner be used on it to get ore from it.

The base values for high alchemy and components are multiplied by the size of the salvage.

These increases work as multipliers for the base high alchemy and component rate. Each salvage gives a base component rate of three.

Rune equipment use a different conversion table due to the value of most drops being reliant on alchemy values.

As an example, a rune platebody will drop huge rune salvage instead, which alchemises for

The four types of salvage between them cover all the possible components that can currently be disassembled from smithable gear.

The spring cleaner's dismantle mode does not work on any salvage items.

The salvages marked in red with a

were only available during the Mining and Smithing beta, and have not yet been made available in the live game.

For a list of all drop sources of any type/size/metal salvage, see Salvage droppers.