From the RuneScape Wiki, the wiki for all things RuneScape
Jump to: navigation, search
The Old School RuneScape Wiki also has an article on: osrsw:Ancient kiteshield
Rune kiteshield (Ancient)? (edit) 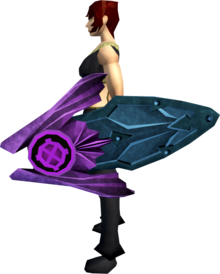 Ancient kiteshield was renamed to Rune kiteshield (Ancient) on 26 June 2017.