From the RuneScape Wiki, the wiki for all things RuneScape
Jump to navigation Jump to search
Not to be confused with Rune Mysteries or Rune Memories.
For the achievement, see Rune Mechanics (achievement).

Rune Mechanics is a quest in which the player assists an apprentice at the Mage Training Arena with constructing a rune guardian.

To start the quest, talk to Apprentice Clerval in the basement of the Mage Training Arena. He will tell you he wants to create his very own rune guardian and ask you to talk to three different wizards: Wizard Dougal and Wizard Edvin, who are in the basement, and Wizard Shug (talk to him later to save time), who is by the Rewards Guardian on the upper floor.

Wizard Dougal will tell you to craft steam, mind, and body runes. You must craft at least one steam rune, but you may buy the rest of the runes. He will give you the water talisman, fire talisman, binding necklace, and the essence to make five steam runes. To make a steam rune, use a water talisman on the Fire altar or the fire talisman on the Water altar, with at least one pure essence and a complementary rune to your talisman in your bag. Leave the room and search the southern or northern bookcases for a book on how to make combination runes if you are unsure about what to do.

Make sure you wear your binding necklace so you have a 100% chance of making all 5 steam runes. The fastest way to craft the steam runes is to run north-west of Het's Oasis and enter the Fire altar. Use the fire talisman on the Mysterious ruins to enter, and then craft the desired number of steam runes by using the water talisman on the Fire Altar.

Once you have crafted the steam runes, you must take them back to Wizard Dougal for approval before giving them to Clerval. 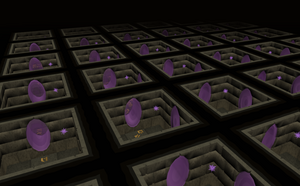 Overview of the puzzle area

Wizard Edvin will have you solve a teleport maze. If you are stuck in the maze, the corner of each square has a floating purple star. Once interacted with, the star will teleport you to the maze entrance. Each portal (there are 4 in each square, except for squares at an edge) has a little icon next to it. The icons represent the movements of different chess pieces, less the queen.

Once the puzzle is solved (the room with the green "X" in box) click the exiting portal – it will be near the top left of the final room. Wizard Edvin will then give you a carving device; take this device back to Clerval. 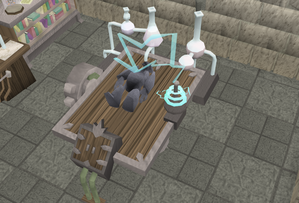 A rune guardian being animated

Wizard Shug is on the top floor to the North, and will tell you that you need a total of 5 pizazz points (from any one Mage Training Arena activity or combined from all four activities). If you have never earned any pizazz points or if you have destroyed your Progress hat prior to the update when all progress would be lost upon destroying the hat, you will have to acquire the points by utilising the Mage Training Arena. (Take one of the four teleports in the north of the ground floor.) After you have 5 or more pizazz points, Wizard Shug will tell you about making the body of the golem, and how to enchant emeralds.

You will need to take either 20 pure or rune essence to Clerval and use the two (cut) emeralds on the workbench (not the animation table shown in the picture) in the basement next to Clerval to enchant them (no runes required); you also need to deliver the 5 body, mind and steam runes. 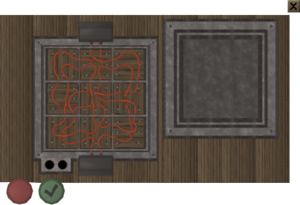 The solution to the wiring puzzle

After talking to Wizards Dougal, Edvin, and Shug, and delivering all the items, talk to Clerval downstairs. He will tell you he needs you to fix the animation table, which is done by completing an easy wiring puzzle (the solution is shown in the lower right image). This is done by dragging the "wire" to the correct spot. After completing the puzzle, click the green circle to confirm.

After you have all 4 pieces of the rune guardian, talk to Apprentice Clerval again. A short cutscene will ensue where it will be brought to life on the newly fixed table, and you will then have the option to keep the rune guardian pet. 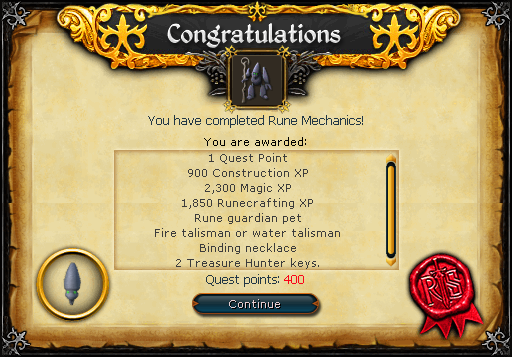 Rune Mechanics is directly required for the following quests/miniquests: 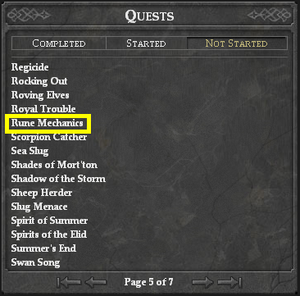 The quest was leaked on the Adventurer's Log before the update
Retrieved from ‘https://runescape.wiki/w/Rune_Mechanics?oldid=35984622’
Categories:
Hidden categories: