From the RuneScape Wiki, the wiki for all things RuneScape
(Redirected from Rune Dragon)
Jump to: navigation, search
The Old School RuneScape Wiki also has an article on: osrsw:Rune dragon
This article is about the normal rune dragon. For the elite version, see Elite rune dragon. 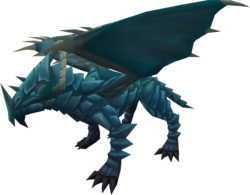 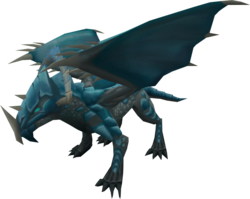 Rune dragons are metal dragons that can be found on Mount Firewake, in Kethsi. In order to fight rune dragons (and be assigned them for a slayer task), the player must first complete the quests Ritual of the Mahjarrat and Fate of the Gods.

They won the first RuneLabs poll, alongside adamant dragons, and were first announced in the June 2015 Behind the Scenes.[1]

Rune dragons are found in the remains of Mount Firewake, where the Kethsians kept the Stone of Jas, until it was overused and awakened the Dragonkin. Also located in this area is the laboratory of the Dactyl Forcae, a disciple of Kerapac, who created the adamant and rune dragons.

If the player dies on Mount Firewake, their gravestone spawns near the World Gate.

Rune dragons have a total of 3 phases that must be completed with each kill, with the first phase requiring the use of dragonbane bolts or arrows in order to break through their metallic armour and with the second phase being unreachable with melee weapons.

As with mithril and adamant dragons, rune dragons use all three styles of combat, in addition to the standard dragonfire. Their magic and melee attacks are simply standard attacks, while their ranged attack will freeze the player for one second, which can be avoided with Freedom and Anticipation.