From the RuneScape Wiki, the wiki for all things RuneScape
Jump to navigation Jump to search
The Old School RuneScape Wiki also has an article on: osrsw:RuneTek 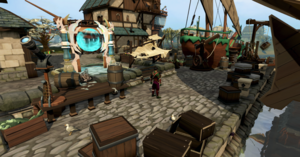 A screenshot of the RT7 engine

RuneTek is the game engine used for RuneScape. The latest version, RuneTek 7, was first released as a beta preview on 24 May 2013.

In a developers' blog, Mod Chris E says that these improvements have been inspired from another Jagex product called MechScape, which has been renamed and reworked into an entirely new game titled Stellar Dawn.

It has been stated in a Q&A with Andrew Gower on 3 September 2009 that this update has made RuneScape that much closer to becoming a console game.

On the 22 December 2010, Jagex released a new trailer for RuneScape, showing a whole new level of graphics. Later, on RuneScape's Swedish Facebook, Mod Valkyrie posted about the new trailer and it was confirmed that the trailer was made using a new game engine that is currently being worked on.

Later, in the comments, in the same post, Mod Valkyrie answered a question stating this: