From the RuneScape Wiki, the wiki for all things RuneScape
Jump to navigation Jump to search
The Old School RuneScape Wiki also has an article on: osrsw:RuneScript 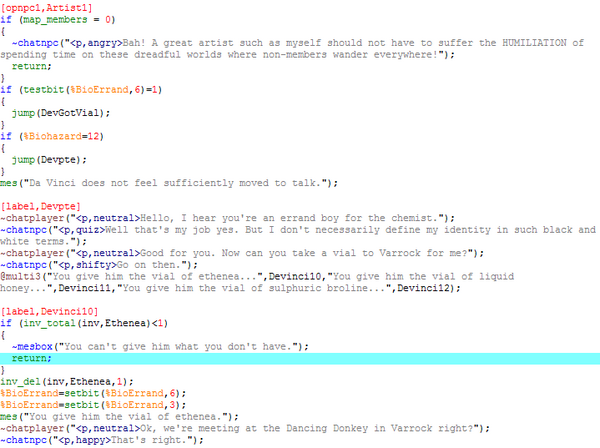 RuneScript sample from the Biohazard quest

Effects on the game[edit | edit source]

Like all programming languages, Runescript has a number of limitations, some of which are inherited from Java.

RuneScape stores the amount of items in a stack using a signed 32-bit integer, which has a maximum value of 231-1, which is equal to 2,147,483,647. Consequently, this is the maximum amount that can be stored as one stack (most often seen with coins). If a player attempts to withdraw or pick-up an item while carrying the maximum amount, it is stated that there is not enough inventory space. This limtation applies separately to every single inventory, such as the backpack, bank, trade offer, Grand Exchange slot, duel stake, reward interfaces, etc.

Killcount in the Beasts tab is stored in a signed 32-bit integer. Two killcounts are stored in a single integer by bit-shifting the values.[3] The maximum killcount that can be tracked in-game is capped at 60,000.

Skill experience is stored as a signed 32-bit integer. Since experience is tracked to the tenths place, the maximum value is reduced by a factor of ten, giving experience a maximum of 214,748,364.7. However, this value is capped; thus, the maximum amount of experience that can be obtained in-game is 200 million.

Skill levels are sent as an unsigned 8-bit integer, meaning their maximum value is 255. This can be seen when touching the Stone of Jas during While Guthix Sleeps quest.

The damage for a hit is stored as a signed 16-bit integer, meaning the maximum that could be dealt in one hit is 32,767 (equal to 215-1). This applies to all hitsplats.