From the RuneScape Wiki, the wiki for all things RuneScape
(Redirected from RuneScape Top Trumps)
Jump to navigation Jump to search 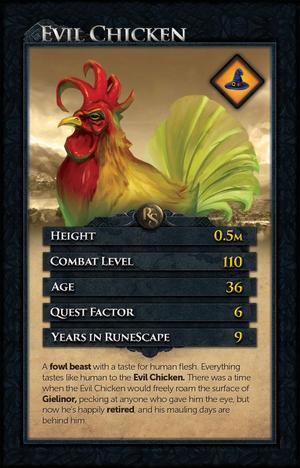 Monsters Of RuneScape Top Trumps is a type of real-life card game released by Jagex in partnership with Winning Moves.

Generally, in Top Trumps, each card contains a list of numerical data, and the aim of the game is to compare these values in order to try to trump and win an opponent's card. In RuneScape Top Trumps, these values are Height, Combat level, Age, Quest Factor and Years in RuneScape. There is also an added optional rule: each card has combat style - either Melee, Ranged or Magic - and when two cards share the same top value, the card with the superior style (as dictated by the combat triangle) beats the other card.

The cards with the highest values in each category are:

Monsters of RuneScape was the first set of Top Trumps cards released. It is themed around the monsters of RuneScape, containing a total of 30, although other characters such as Yelps and Moia also appear. It was released on 12 December 2013, at a price of GB£5.99, US$10.00, or 3 Bonds, costing 202,455,687. Packs can be purchased from backstreetmerch.com, or with Bonds by following the instructions on the Top Trumps page on the RuneScape website. A pack was also given to each Runefest 2014 attendee.

15 character cards were selected by the RuneScape Team, while the remaining 15 cards were chosen by the RuneScape community. From 26 October to 8 November 2013, Jagex conducted polls in the official website to determine the 15 monsters to be featured.

Ever wondered whether Nomad could outmuscle TzTok-Jad? Or speculated about the age of a Dragonkin? Look no further than RuneScape Top Trumps: Monsters - a card-battling game for two players or more.

Play with a friend and beat their score in one of five different categories to win their card. Aim for complete domination! Playing is simple: the cards are dealt between at least two players. The starting player reads aloud one of the statistics on their first card. Each player states the values of the same category on their first cards. The player with the best value wins all the cards and places them at the back of their deck. The next player then repeats the process with their next card.

List of cards from Monsters of RuneScape[edit | edit source]