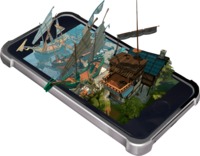 RuneScape Mobile is the mobile client for RuneScape announced on 17 July 2017. It was released 17 June 2021 for all iOS and Android users. Prior to this, it was available on Android as Mobile Early Access to all members on 29 October 2018 through the Android Beta program, and on iOS for selected beta testers.

RuneScape Mobile allows players to play RuneScape on their mobile devices. It works cross-platform with players on PC, and players are able to play using the same characters as they do on their desktop clients.[2]

Audio that is playing from other apps will continue to play while the game is open, though the player can choose to listen to the in-game music instead.[3]

The mobile client increases the radius of area loot from 7x7 to 17x17 (or increases from 9x9 to 19x19 with the Lorehound active).

The freecam mode is not accessible on the mobile client, neither by using the orb of oculus nor through the compass icon. Trying to access it results in a message You cannot use this on this device.

The mobile store can be accessed by tapping either the RuneCoins or Treasure Hunter currencies in the home menu. The microtransactions available in the store are divided into the following sections.

Major development on a mobile client for RuneScape began sometime between March and April 2017. Jagex decided that it was the right time to start work on a mobile client because of player lifestyle changes such as having to go to work or to college. They note that they are trying to "make the games as accessible as possible" and appeal to new players.[3]

A closed technical test for RuneScape Mobile began on 24 October 2017 and lasted until 30 October.[5] Invites were sent to a small number of players through email and the Message Centre.[6] Work in progress images of different interfaces from RuneScape Mobile were shown on 7 November:[7]

The closed beta for Old School Mobile was expected to start in late 2017 but was postponed. A technical beta involving 2,000 players ran from 2 February to 8 February 2018.[8] On 10 April, another beta for Old School Mobile began for 5,431 players using iOS, lasting until 19 April.[9] An open beta test for Android was released on 5 July, with the Android mobile app being available to download on the Google Play store. Although free to download, only players with a members subscription were able to sign in and play. An open beta for iOS was expected to release later in Summer 2018. 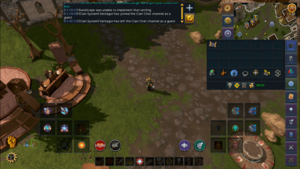 A screenshot of a beta build of RuneScape Mobile on iOS.

A closed beta for RuneScape Mobile on iOS began on 3 May 2018, with invites being sent out to a selected group of people who registered their interest.[10] The results of the beta were reported in a newspost on 4 July. A closed playtest for Android began on 2 August.[11] On 8 October 2018, an open Android beta available to all members began. 25,000 slots were available on a first-come, first-served basis.[12]

Old School RuneScape was released for mobile devices on 30 October 2018.[13]

On 29 October 2019 the Android version of RuneScape Mobile was opened for an early access program for all members, introducing founders packs for all players with access to the program.

Starting on 11 May 2020, iOS TestFlight spots were slowly opened up to players, allowing a total of 9,900 available slots. Along with the release of the Android open beta, the first of three sets of founders pack rewards became claimable by all mobile users with access to the beta. This means that the pack is only claimable with certain Android devices. However, the pack will continue to be available upon the release of the iOS version.

To access and claim the founders packs, you must be logged into a game world on the mobile app. From there, select Settings (house icon, top left); next, select the Upgrades & Extras icon (shopping cart icon, third icon on the left); lastly, select Mobile Founders tab at the top of the screen.

After claiming the first set of rewards, the player must wait a week before they can claim the other two.

Hitting certain (undisclosed) pre-registration thresholds on Apple's App Store and Google Play unlocked the following pre-registration rewards that are unlocked upon logging in using the mobile client after the beginning of 17 June 2021: