From the RuneScape Wiki, the wiki for all things RuneScape
(Redirected from RuneScape German)
Jump to: navigation, search 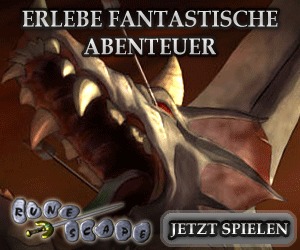 A German RuneScape Ad for the introduction of RuneScape in German

It allows players who speak German to interact with the game and other players more easily, and is useful to residents of Germany and other German-speaking parts of the world, as well as people who may be learning the language and wish to practice.

Prior to ClusterFlutterer, RuneScape Germany had 6 worlds, which were subsequently removed. These worlds had an increase in popularity, owing to the majority of macro programs being restricted to only work in English.[source needed]

The three remaining worlds are reflective of the current player base who have German as their primary language, or are hoping to train unhindered. Unfortunately, before bots were nuked, it looked like that more people spoke English[source needed] than German in these worlds, to have a play in a server without macros - this has now changed.

There are three servers in RuneScape Germany. These servers are located in Germany and the U.K.