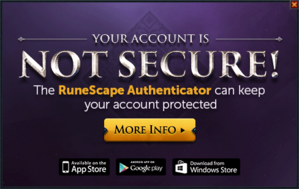 The warning players get if they do not have Authenticator active on their account.

The RuneScape Authenticator is an additional layer of protection that players can add to their RuneScape and Old School RuneScape accounts. It replaces the Jagex Account Guardian by using Google's Time-based One-Time Password, supported by two-factor authentication apps on both mobile devices and desktop computers.

Setting up the authenticator[edit | edit source]

To set up the RuneScape Authenticator, players must visit the Authenticator landing page. Jagex generates a secret key unique to each user and presents it as a QR code and as a 16-character string; these are used to add your RuneScape account to a two-factor authentication app (Jagex recommends Authy or Google Authenticator on its support pages). Once set up, players are prompted to enter a 6-digit time-based code whenever they log in to the game using an untrusted computer. Players can choose to trust the computers on which they play RuneScape for up to 30 days or choose to enter a code every time they wish to play. Jagex implements a 10-minute window (five minutes on either side of the actual time) to enter the correct code to allow for a possible lack of synchronisation between Jagex's server time and player devices.