RuneScape 3 is a large collection of new features added to the existing game, released on 22 July 2013, including a reworked orchestrated soundtrack, a new customisable user interface, and new camera controls.[1][2]

Development on RuneScape 3 was first mentioned by Mark Gerhard on 9 September 2012, during a "Botting in RuneScape" Q&A live-stream on the RuneScape YouTube Channel.[3] Gerhard suggested that micro-payments, such as Squeal of Fortune, were helping to make a "war chest" (or "fighting fund"), allowing Jagex the ablity to fund large future projects.[4][5] Future live-streams included discussions about RuneScape's general future, including the possibilities of a RuneScape 3.[6] 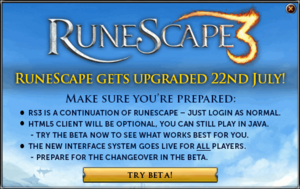 A popup displayed upon logging in on 17 July 2013, announcing the upcoming release of RuneScape 3.

The RuneScape 3 release date was officially revealed via a news post on the RuneScape website on 3 July 2013.[9] RuneScape 3 was released on 22 July 2013; the HTML5 client was not included within the update.

At RuneFest 2013, it was revealed that the HTML5 client had not worked out, partly due to poor web-browser performance. During RuneFest 2014, it was announced that a new client, operating via native code, was being developed incorporating much of the HTML5 client's software architecture and features. This new client, written in C++ under the code name NXT, was released on 18 April 2016. NXT superseded the Java and HTML5 game clients which began to be phased out of service.

The following is a list of features included in the RuneScape 3 update: 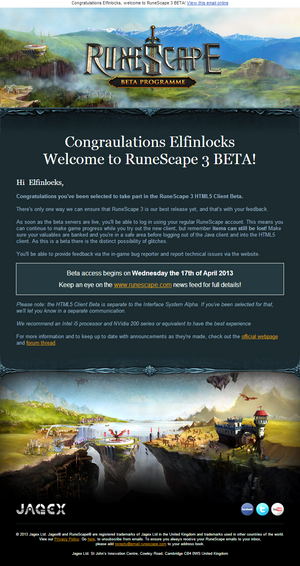 In an email sent out to registered beta testers, Jagex recommended an Intel Core i5 processor with an Nvidia 200 series GPU, or equivalent, to have the "best experience". Once the RuneScape 3 update was released, the recommended system requirements were revealed to however be:

The HTML5 client was a revision of the Java Game Client to be integrated in upcoming updates for RuneScape 3. The implementation of HTML5 was promised to make the game run faster and with better graphics,[2] and was planned to have allowed for RuneScape to be played natively on mobile devices and tablets.[10]

The HTML5 client never made it out of its beta phase due to numerous optimisation and stability issues. It has since been superseded by NXT, a C++-based client.[11]

In addition to new graphics, RuneScape 3 launched including a new interface engine, known as the New Interface System, or NIS, allowing for a complete customisation of every players' interface. The interface consists of Action windows, customised in the Management Interface, which can contain various interfaces. These Action windows can be merged into a single window with tabs to choose the current window.

The RuneScape website was redesigned alongside the release of RuneScape 3, including the addition of Seasonal Highscores.