From the RuneScape Wiki, the wiki for all things RuneScape
< RuneScape:Wiki Post‎ | Editorials
Jump to navigation Jump to search

Recently, the trolls of RuneScape were given graphical updates to look and animation, as did their homes. Lots of races currently use the newest graphics made by Jagex. The older players, however, can very well remember how it used to be.

Let's go back to, say, 2007, when High Detail (and lots of other things, like Summoning, Sumona and Soul Wars, but let’s forget that) was not yet released. Trolls, humans, gnomes all used the same animations. These animations could barely be called animations, as they consisted of simply moving the body back and forth every game tick. Not the mention the poor textures. Anyway, when the Summoning familiars were released, they used upgraded animations, although they still had no texture due to the lack of the "HD element". This was released in July 2008 and from then on, Jagex actually started frequently improving the looks of basically everything.

For example, animation pack were released in which weapons and their animations were updated. Races received revamps, such as ogres in March 2009, dragons in July 2010 and the long-awaited updates to gnomes in February 2011. New versions of RuneTek were released. Tweening, particles and with Elemental Workshop IV bloom lighting were instated and are now used in basically every update. We’re in the middle of the Era of Improved Graphics. Few things still have the old, blocky look, such as vampires and vampyres. 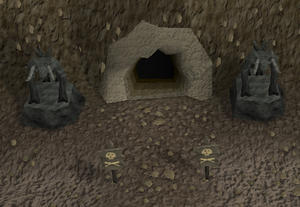 Old graphics for a cave entrance.

Even with current graphics, a few categories can be seen.

So, in a nutshell, there are always things out there to be updated. Perhaps over five years the now in my opinion great looking gnomes, or trolls, or those dragons are updated again and the great graphics and graphical effects that we love today will be like DeviousMUD in our eyes. But perhaps not. We’ll see how graphics will evolve further but for now, let's enjoy what we’ve got!

What is your opinion on graphical updates?
Please vote below. Results will be shown when you have voted.
You are not entitled to view the results of this poll before you have voted.
There were 0 votes since the poll was created on 17:40, 24 September 2018.
poll-id 31883D63A38FD739FE57A45FB8CAFCA1
Retrieved from ‘https://runescape.wiki/w/RuneScape:Wiki_Post/Editorials/Graphical_Improvements...%3F?oldid=11607219’
Category:
Hidden category: