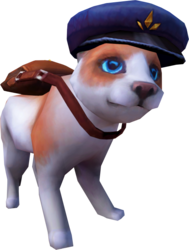 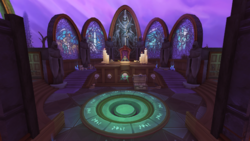 Description: A tranquil Saradominist islet in the Eastern Sea, with only minor zombie pirate invasions.
Reason: Looks pretty neat as a thumb, and the composition is really nice, what with the ship and the church.

Description: A small safety haven in the chaotic fabrics of the Abyss.
Reason: I thought it looked surprisingly nice, especially with the skybox. Nice way of showing off a recent update too.

You should've done that after the nomination closed, per policy, but since it's pretty much exactly the same, it probably doesn't matter in this case. And by 'pretty much exactly' I mean 'literally exactly except it's darker' :P. Edit: actually, comparing the two, it's a lot darker...can't you turn off LD or increase brightness or summat? If not, I propose the original version be used, because this is just too dark. :( User_talk:Fswe1 Fswe1

Lighting on it is fine, it's not too dark, besides it wouldn't properly represent how the area looks if I turned some settings off just to make it "brighter". As for one main difference between the Java and NXT version, the skybox has a much higher texture than that on the Java client.

Could potentially have it show a different type of environment for the checkpoint, as this is how the darkmeyer theme looks ingame.

Just grabbed one from a different environment setting than Darkmeyer, which is much brighter and can bee seen here.

Works for me, or you could just turn off LD... (or use my original version - the skybox differences aren't noticeable) User_talk:Fswe1 Fswe1

LD on NXT only turns off the lighting effects emitting from various sources like the portals, it does not make the area brighter. Here's a comparison showing the Freneskae environment with LD on Ultra and with it on low. Also the skybox difference between your version and the one I've uploaded is extremely noticable

Was not aware, point taken. And I hadn't noticed the difference until you pointed it out, to be frank. :( Can always artifically play with brightness and contrast in GIMP I guess, but as Cook said, the previous version's brightness is fine. Only the skybox is of lesser quality, but at least that is not noticeable at all when thumb'd. So a choice between two evils, I guess. User_talk:Fswe1 Fswe1

Image will be featured. I think the greatest consensus would be around this image - it's brighter to make Cook and Fswe happy, it's NXT to make Isobel happy, and it's one of Tony's to make him happy.

Description: The specialised apparel of a true pioneer in Runecrafting research.
Reason: As remarked by Isobel, it woul be healthy to have some more equipped item images featured. I chose the best of the best, nominating my top five in bulk. In this case, the robes look very vibrant and colourful and are very much FIMG material what with the unique skirt and the pretty details like the talismans and the goggles. 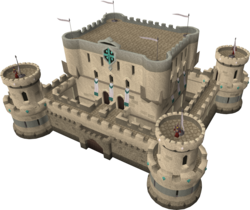 Description: The heavily fortified citadel of a treasonous Knight of Falador.
Reason: It looks bloody amazing, that's the reason, :P. I've wanted to have an image of this for ages and finally I've succeeded in getting one - a fairly decent one too if I say so myself.

I wouldn't worry too much about that, I doubt they'd actually go through with it. But, to answer the question, it would get automatically delisted two weeks after the removal, or earlier if someone makes a discussion. Per Forum:Obsolete featured images, obsolete FIMGs are automatically delisted two weeks after they're made obsolete if no suitable replacement passes an FIMG nomination, and since removal means there can be no replacement by definition, it'd be removed. --LiquidTalk 04:35, September 21, 2017 (UTC)

What? It's be historical, not obsolete. We have at least one other historical image featured. User_talk:Fswe1 Fswe1

Did somebody say historical featured images?

Hmm, well, the standard per that thread is that the image has to be of such historical significance that it continues to add to the page. So, I guess you are correct. Unless we delete the mobilizing armies article, the image will remain featured. My bad. --LiquidTalk 19:47, September 22, 2017 (UTC)

What guidelines would we need for .gifs?

Whether they're allowed or not, dimensions, how to treat quasi-obsolete ones (e.g. pre-EoC player model, but animation of interest hasn't changed), ... User_talk:Fswe1 Fswe1

Presumably we wouldn't feature either images or gifs that had outdated player models, because we shouldn't be featuring things that need to be retaken. As for dimensions, aren't all featured images resized into the box on the mainpage? I don't think there's much we need to establish for .gifs to be featured, but if you want to make a proposal about it then go ahead. 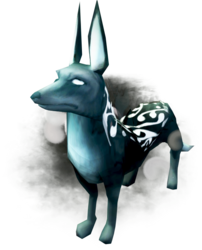 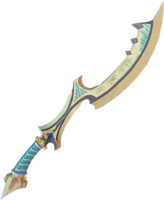 Description: An ancient blade dropped by the Magister, detailed with inscriptions towards the God of the Sun.
Reason: cool design 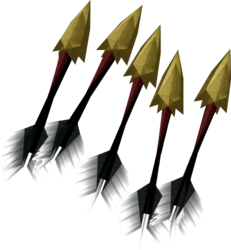 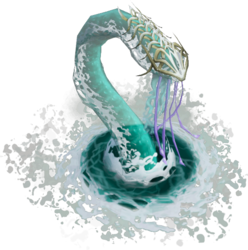 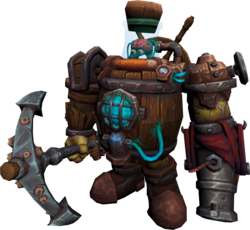 Description: Mi-Gor's fearsome zombio-mechanical monstrosity. With googley eyes.
Reason: Great angle, making it really loom over you. The brain's cute, too. And we have few images of NPCs/monsters featured.

Description: A wise Zarosian Mahjarrat defending himself at the Ritual of Rejuvenation.
Reason: Look at it, it's flipping amazing. Oh and more NPCs featured is always nice.

As far as graphics go, 2011 is pretty recent though. :/ Besides, I'd argue this looks miles better than the jpeg textures Jiggles are overindulging themselves in nowadays, but that's just my opinion, so eh. User_talk:Fswe1 Fswe1

Some things age better than others: as per the second second sentence in my comment I do not think that this is one of them.

Yeah, if we're going to have him featured it should be his current look seen here

Apart from that being uglier (IMO), he doesn't look like that in RotM. User_talk:Fswe1 Fswe1

Description: The spooky and seemingly abandoned northern district to Aminishi.
Reason: Its spooky and purdy

I'd hardly call this image dark when thumb'd, especially compared to the other 4 images it's sitting next to on the Aminishi page. 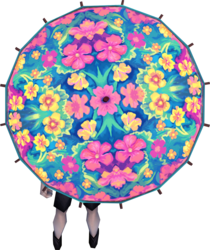 Description: Idk.
Reason: We don't have many equipped images featured: this one shows an attractive and detailed item. The image has been captured well to show the parasol.

Changed to oppose. Giving it some thought, those legs would very definitely be not okay on the main page. User_talk:Fswe1 Fswe1

Description: The exquisite swagger worn by the highest-ranking ARMS officers.
Reason: As remarked by Isobel, it woul be healthy to have some more equipped item images featured. I chose the best of the best, nominating my top five in bulk. In this case, the image's angle makes the player very impressive and intimidating indeed, and of course the clothes looks absolutely fabulous, exuding true authority.

I only said that because the minigame is planned to be removed soon™, so maybe having sets that might be unobtainable in future aren't the best thing to have on featured images. Just my two cents though. And whoops, don't know how I mucked that up. --Talk to Kelsey 11:46, August 11, 2017 (UTC)

I don't think that's a good reason to oppose. We already have a process for delisting obsolete images. If the minigame gets removed then the image can undergo the mandated obsolete delisting discussion, but as of right now it's still obtainable. Besides, removing Mobilizing Armies has just been floated as an idea by Mod Osborne as far as I can tell. I'm not aware of any intentions to actually remove it.  —The preceding unsigned comment was added by Liquidhelium (talk).

Would not be an obsolete image either, since the set would still be obtainable (presumably, they wouldn't just remove it from the game even if they removed MA (Saradomin forbid)). Even if they would, though, it'd be a historical image, like Xmas 2009 (which is featured). But all technical details aside, if you love the image, you should support, regardless of the source. :) User_talk:Fswe1 Fswe1

Description: Sample description.
Reason: As remarked by Isobel, it woul be healthy to have some more equipped item images featured. I chose the best of the best, nominating my top five in bulk. In this case, the robes are incredibly detailed - but not too much so - and look very sinister indeed with the creepy face on the torso, finished by the unsettling ruby in the centre. Also the DII was delisted and we can't have that for the best-looking outfit in the entire game, can we?

No there haven't, bow to Lord Drakan! >:) (but seriously, you should nominate them, since I sincerely can't think of any) User_talk:Fswe1 Fswe1

Description: An ancient set of gear stealthily 'borrowed' from the pharaohs' tombs within Jalsavrah.
Reason: As remarked by Isobel, it would be healthy to have some more equipped item images featured. I chose the best of the best, nominating my top five in bulk. In this case, it's just very pretty; I really like the upper sleeves and the pharaoh-esque headdress.

Description: A most intimidating set of warrior's equipment from the depths of Daemonheim.
Reason: As remarked by Isobel, it would be healthy to have some more equipped item images featured. I chose the best of the best, nominating my top five in bulk. In this case, the armour simply looks amazing with all the details sticking and twisting out, and the snarling face.

Description: A cosmetic override set resembling the outfits of the citizens of Menaphos.
Reason: cool 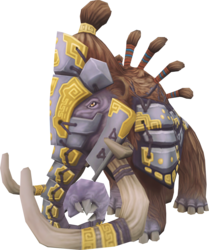 I never really thought of FIMG as "advertising" content per se. From RS:FI: "Featured images are images that add significantly to articles, either by illustrating article content particularly well, or being eye-catching to the point where users will want to read its accompanying article." Nothing in there suggests that the article has to be about accessible content. If the image can stand on its own then it is feature-worthy. --LiquidTalk 04:46, September 21, 2017 (UTC) 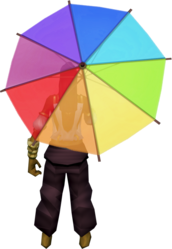 Description: The perfect accessory for when there is a rainbow!
Reason: Cool looking item, nice colours, good translucency by MaximusGugu. 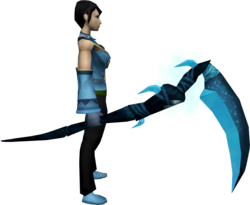 Then I guess this brings up the DII discussion - would I support a DII pic of the scythe? Probably not - I’ve just never seen DIIs as something worthy to be featured (exceptions do apply eg DFS). Prove me wrong though, show me a DII of an ice dyed scythe. Haidro