Description: Lurks in the shadows—waiting to slit your throat.
Reason: Such an interesting picture, lots to look at, bad-a**, good quality & large, etc.

The image will be featured. The description of the image will be Lurks in the shadows, waiting for a moment to strike. JOEYTJE50TALK pull my finger 15:44, August 16, 2012 (UTC) 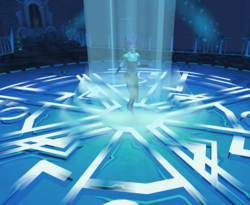 Description: Ariane, trapped in the mysterious power beam.
Reason: One of the more capturing images of the quest and is currently the image used for the Quest Infobox as seen here.

Description: The gloomy and damp depts of the Polypore Dungeon. Created from fungi by a bored Ramokee.
Reason: It has a really nice depth to it and it feels very large. All the little islands and layers as well as the graphics of the image make it an interesting scene.

Description: A world renowned institute of studies in magic and runecrafting and bauble of the Fifth Age.
Reason: Look. At. It.

The image will be featured. --

Description: idk
Reason: FIMG is dead and I'd like to revive it.

Closed - The image will be featured. 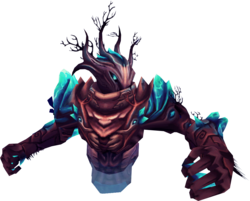 Description: The splendid entrance to the long-lost crystal city of the elves.
Reason: It's purty.

Description: dunno
Reason: A lot of our FIMGS are of older content; we don't have anything that recent apart from Prifddinas/Dark Lord and Runespan/greater dragon 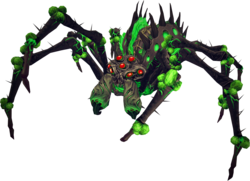 Description: The arrival of the Queen in Varrock for the Diamond Jubilee.
Reason: I am nominating this image as i think it shows the end of a very nice and fun Clue fest very well. This image is of good quality and has a lot going on in it, like ofcourse the Queen.

There is no consensus to feature this image at this time. 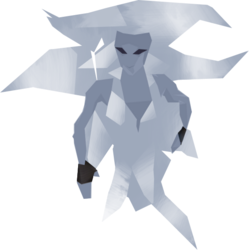 First nomination - RuneScape:Featured images/File:Ghost.PNG
Description: An undead monster creeping around the dungeons of Gielinor.
Reason: The translucency is amazing, just the overall aspect of the image is phenomenal.

How d'ya think she died?

There is no consensus to feature this image at this time.

Description: Due to the cunning and complexity of a Phoenix nesting habits, few adventurers will ever see one.
Reason: Extremely rare world event (roughly 1% chance of occurring).

As noted above self nominations are not permitted, see the fifth bullet point here. As this is an image of such a rare event, I have placed it on the Phoenix Lair article. cqm 12:13, 6 Apr 2013 (UTC) (UTC)

Description: An image of the Troll Warzone turotial which shows Major Mary Rancour defending Burthorpe from the first conflict of Runescape: the troll invasion.
Reason: It fits perfectly as a characterizing picture for Runescape.

Description: An image of the Troll Warzone turotial which shows Major Mary Rancour defending Burthorpe from the first conflict of Runescape: the troll invasion.
Reason: It fits perfectly as a characterizing picture for Runescape.

Comment - Never was I asked renominate this. I like this image and I feel it should be featured regardless of a silly rule. MolMan 17:05, April 7, 2013 (UTC)

Oppose - The angle is nice, but the image is just a big gray blah. Her face and body blends in with the tower. <.<

Oppose - Mary's chest looks detached from her body, being strangely large. Aside from her, the image contains a grey tower, a grey sky and some other blobs of grey. I like the image, but the coloure are too dull. For something completely irrelevant, will RS3 graphics bring like 10 new FIMGs, you think? User_talk:Fswe1 Fswe1

The preview of Polypore dungeon looks like it might bring some long distance shots that we wouldn't have been able to get before. cqm 10:59, 8 Apr 2013 (UTC) (UTC) 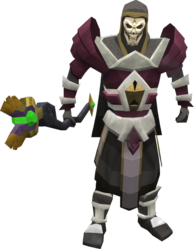 Description: Master of the thousand curses.
Reason: I think this image is really badass. It's a massive Mahjarrat wielding the staff of Armadyl: he looks very imposing, ready to take over the world. The quality of the image is also very good: you can even see the tiny red flames burning in his eyes.

Description: The home of a Saradominist order who celebrate the life of the holy Saint Elspeth.
Reason: The abbey looks very majestic, like a beacon of human accomplishment in the desert. The skybox makes it wonderful and gives it a sort of evening-y touch which makes it emit a serene look.

Lack of consensus, image will not be featured 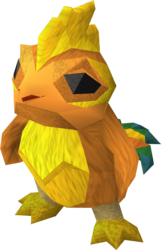 Description: A kidnapped phoenix chick staring at its master in awe.
Reason: Well, it looks much more better than this ugly thing. Plus, it's cute.

Description: The Rewards Guardian guards... Wizard Shug from uh... reward. Theives. That like rainbow hats. In all seriousness, it's the Rewards Guardian standing adjacent from Wizard Shug, looking at the camera whilst a flying book is doing it's thing next to him.
Reason: I try not to pat myself on the back, mostly because it hurts my arm, but i think that this is a fine piece of work I did. It's colourful, and shows the interesting features of the shop's area.

Description: The former mansion of Ormod Gulvas, situated by the King's Road in Silvarea.
Reason: FIMG is, indeed, dead, and I don't care about self-nominations at this point. Anyway, it looks quite nice and eerie, although I suppose it could focus on the actual mansion more. Nevertheless, the blue and green prevent it from becoming dull grey so it still looks decent.

The Faraway Place where Things are Kept 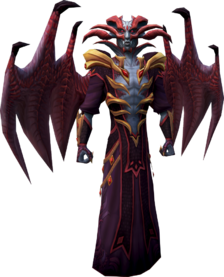