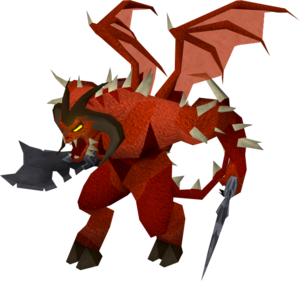 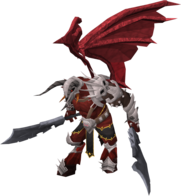 K'ril got himself an update today. Per Forum:Obsolete featured images, the old image will be delisted, and there is an opportunity now to choose a replacement. The new version is of great quality. All non-FIMG uses of the old image have been replaced. ʞooɔ

Image will be replaced.


Reason: Obsolete. That camel is rather annoying too..

Image will be replaced.

Yeah, changed to Delist altogether. Per a couple people.

I like that, but I think it needs more surroundings, with trees and grass instead of plain brown rocks. User_talk:Fswe1 Fswe1 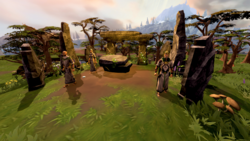 Reason: Troll Warzone has made it obsolete, and the new version looks much nicer.

[[File:TzHaar_entrance.png|250x250px|right|Suggested replacement|thumb]] Description: This is an image of Tzhaar before the graphical update. I think it should be delisted
Reason: This image is from before the update, and is therefore obsolete.

Support - Because it only has two colours and looks somewhat ugly. That said, I disagree that we should delist images only because they were updated. I thought the idea was to show how great things look on RuneScape. I don't see the relevance of being obsolete or not. Anyways, this image is fairly boring bad_fetustalk 16:49, February 22, 2012 (UTC)

Notice of intent - Nomination extended until 31 February 2012. Users have a week to suggest replacements for this image. If no suggestions get adequate consensus, then the image will be delisted per consensus. Matt (t) 06:04, February 24, 2012 (UTC)

The image will be replaced with the suggested replacement.

No, the water is not obsolete, I just took it with DirectX as opposed to OpenGL, which should be done as per consensus. I now realize that i appear to have had lighting detail off when i captured the image.. Apologies for that.

Moved nomination - I uploaded another version because this one got opposes only because of the water, and because Hazelmere was outdated. The new nom page can be found here. JOEYTJE50TALK pull my finger 15:21, March 7, 2012 (UTC) 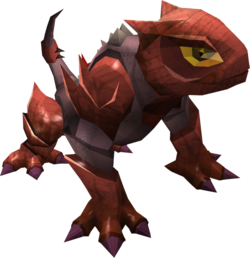 Now now this nomination still has six days left on it. Let's give the imagemakers some time to add transparency before opposing for that reason. --LiquidTalk 16:10, February 21, 2012 (UTC)

You can't change a nominated image during a nomination can you..?

Closed - The image will be delisted

Description: The elven forest with its beautiful nature.
Reason: The trees received a graphical upgrade so this obsolete image needs to be replaced.
Previous nominations: First - Second - Third nomination

Closed - The replacement nomination is successful

Reason: That tree to the right is outdated. I'm nitpicky.

Reason: Obsolete chararcter. Also the old image seems color-enhanced, as the new image is taken in maximum settings with no color enhancement.

Support 2 - I like the extra details and nicer lighting on the second. 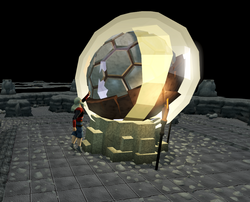 Reason: Old image has obsolete player and armour, and is definitely colour enhanced.

[[File:Al Kharid palace replacement.png|thumb|Replacement (2)]] [[File:Al Kharid palace replacement1.png|thumb|Replacement (3)]] Reason: The current image is obsolete, and i've uploaded a new one. The person who I almost got myself in a revert war with seems to think my version should not be included because it is "crappy", but the higher angle is neccesary as the palace is now much taller with a 3 story high arch in front that would get in the way otherwise. I realize that there is background fog, but so is there in the original... Ansela reverted and protected it with the statement "leave FIMGs alone" shortly thereafter. Now, obviously Ansela has the final say so this vote is pointless and may get me banned, but despite it's featured status, it is still obsolete.

Comment - It's obsolete, yes, but I don't like the new version either. I volunteer to retake it (with AA and a better angle and stuff), but I'd rather have the obsolete version featured, since it still looks very good. User_talk:Fswe1 Fswe1

Delist - It's pretty much impossible to do the new version of the palace justice with the current drawdistance. Perhaps after the drawdistance increase someone can use two monitors to get a better screenshot worthy of being featured..

Notice - Nomination extended by 1 week. If there are no further comments within that period, this nomination will be unsuccessful, and because the image is obsolete, it will be delisted. JOEYTJE50TALK pull my finger 14:37, October 9, 2012 (UTC)

Support 3 - The part of the castle isn't cut off, along with it being centered and more symmetrical. That makes it cleaner to look at, at least for me.

Support 3 - Better angle in my opinion, and there isn't as much fog as number 2. Haidro

Closed - The image will be replaced with image 3. 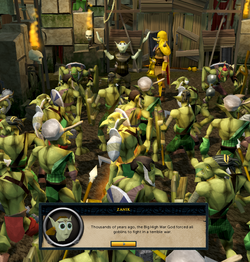 [[File:Goblin village gathering new.png|250px|right|thumb|New]] Reason:Obsolete, goblins updated, but the mob isn't. Also, my screen isn't big enough to get a perfect shot :(. Different angle from the odl one, teh chatbox would be in the way otherwise.

Extended - If this one doesn't get more comments, it will be delisted for being obsolete, and have the file replaced. JOEYTJE50TALK pull my finger19:28, October 28, 2012 (UTC)

Closed - This image will be delisted

New image - Has the same angle and such as the old one. Sorry for the lateness, extend nomination if ye want.

Close - Version 2 will be used to replace the obsolete FIMG. --

Description: Lurks in the shadows, waiting for a moment to strike.
Reason: Sheathed position. New idle position makes it look much better.

It's sheathed, and I also asked Ryan to add offhand scimitar override as well. -- 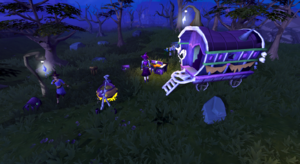