Kree'arra is the Aviansie general of Armadyl in the God Wars Dungeon. He is accompanied by his 3 sergeants, Flight Kilisa, Wingman Skree, and Flockleader Geerin.

Note: This is the hard mode version of the fight. For information regarding the normal mode version, see here.

Kree'arra is within God Wars Dungeon, and it is recommended to at least have Trollheim Teleport (Lunar) unlocked. You can also use God wars teleport, Max Guild boss portal or War's Retreat boss portal tuned to Kree'arra. From Trollheim, climb down the cliffsides go north past the thrower trolls, past the large rock, and down the entrance into the dungeon near the wolves. Once there, run south and cross the chasm into Armadyl's Eyrie - this requires 70 Ranged, which is not boostable.

To get into the boss room, you need 40 Armadyl followers inside the dungeon or have an active Totem of Intimidation. This can be done anywhere in the dungeon. All monsters in the dungeon are aggressive to those that do not display an item of allegiance to their god. The shard of Zaros, Ancient Book, and any piece of equipment dropped by Nex will render all combatants in the main dungeon docile. For a full list of protection items, see God Wars Dungeon#God-related protection.

Melee does not work here, so you must use magic or ranged. In general, GWD1 bosses are extremely easy in a mass, even the hard mode versions, so it doesn't really matter what gear you bring. 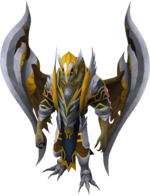 Kree'arra can attack from all 3 sides of the combat triangle, and his body guards each fight with 1 specific style — all together, covering the entire combat triangle. His main special attack is "Storms, align to me!" where blue and yellow tornadoes barricade him for a short time. After, he says "Feel the power of Armadyl!" and sends out the tornadoes in all directions. Stay away from them and very little damage should be taken. Literally just hit him until he dies, then repeat for the rest of the event. Don't go overboard on gear or food or familiars because you really won't need much at all.