The Kalphite King is the strongest Kalphite boss, residing in the Exiled Kalphite Hive. It is the first monster to use abilities and is known for dropping Drygore weaponry and the Perfect chitin for t90 defenders.

Without the Boss Portal in the Max Guild, the fastest way to get to the Exiled Kalphite Hive is by teleporting to the Bandit Camp lodestone. From there, run south until the end of the Pyramid from Desert Treasure and then immediately southeast into the Hive entrance. Inside, go east and mine through the hole in the wall if not already cleared, then enter the host's instance.

The Kalphite King (KK) has three different phases - magic, ranged, and melee. In each phase, the colors of his wings, attack style, weakness, and attack rotation change accordingly. There are only two roles, the tank and the provoker (voke); these roles will be covered by the event host/other volunteers, so all participants will come as DPS.

KK can spawn in any phase and may change styles at will. His regular attacks often feature stuns and bleeds, so use Anticipation and Freedom to prevent and clear these effects.

These attacks occur at any time during the kill, except for those stated otherwise. 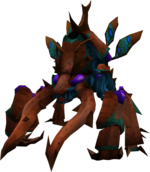 KK's wings turn blue, he uses magic attacks, and is weak to ranged. This is the deadliest phase during a mass, as the primary attacks include orange orbs thrown to each player's current location and then explode for AOE damage a few seconds later. It's easy to die if you're caught in the middle of several orbs, so continually run back and forth while he throws orbs. Damage can be negated via Barricade or Devotion while protect/deflect magic is on. He also uses blue orbs that target each player specifically and damage immediately. There is no instant kill attack during this phase.

KK's wings turn green, he uses ranged attacks, and is weak to melee. The instant kill attack happens relatively early during this phase, but otherwise there's nothing special about it. There is no charge attack during this phase. 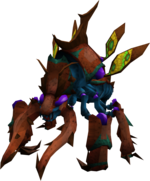 KK's wings turn yellow, he uses melee attacks, and is weak to magic. The instant kill happens relatively late during this phase, but otherwise there's nothing special about it. Only players close to KK will receive damage, so those using magic or ranged can just keep their distance and use Soul Split. There is no dig attack during this phase.

Phases and kills go by quickly in a mass, so you only really need to bring one style. Using magic or ranged is recommended because it's easier to dodge orbs during the magic phase, but it doesn't really matter. Some people may bring more than one style because of KK's changing weaknesses, but the odds of death are somewhat high and any extra equipment will cost more to buy back from Death.

The Kalphite King's notable drops are the Drygore longsword, Drygore rapier, Drygore mace, and their respective offhands. He may also drop the Perfect chitin, used to create the t90 defender. At the event, the perfect chitin can drop to anyone in the instance who has Lootshare on and has a t80 or t90 defender in their inventory or equipped.

Otherwise, KK and his minions drop several sharks, prayer potions, and super restores to help sustain players' supplies while in the instance.