Beastmaster Durzag is the first boss of the Liberation of Mazcab raid. There are no hard requirements for facing him, though surviving the kill requires high combat stats and good gear.

As this is usually a popular event, please familiarise yourself with the fight from this page or a recent video, and gear appropriately so you are ready to join the teams. We will take those who are more prepared first. Also, preferably download Teamspeak, as we will be using it for this event. See the Communication section below for details.

The fight has several mechanics and different phases to look out for. After the horde phase and Beastmaster Durzag spawns, there will be designated tanks for the pets Cormes, Krar, and Tuz and then for Durzag himself. Listen to ranks when they call for you to get off a target and switch to a different one. Participants should pay attention to these calls and also not attempt to provoke the pets or Durzag off the tanks. Those who do not listen to directions or who provoke the targets will be kicked. Also, all participants must have their privacy mode set to Anyone so we can check gear.

If it's your first time to Beastmaster Durzag or you're not very familiar with the fight, listening to calls is extremely important. As such, most teams try to get together on a voice communication program like Discord. The wiki has its own Discord server, which we very highly recommend using. We will likely use the channel #events and potentially others if there are multiple teams/instances running during the event. You don't need a microphone to speak, it's more important to listen when learning the boss. For those who aren't present on Discord, there will be in-game calls of course.

Durzag attacks with AOE melee, and anyone close to him will get enrage stacks. Therefore, at this event, we will only take participants using magic or ranged. Additionally, this is end-game PvM content and requires high combat stats and good equipment. Because the fight only allows a maximum of 10 players at a time, those with better gear (t90 power armour, t90 weapons) will be prioritised and at most one or two participants with gear meeting the minimum criteria (t70 power armour, t75 weapons) will be allowed in each fight to ensure smoother kills.

The table below covers the best equipment to bring. Either ranged or magic gear is necessary, and dual-wield versus 2-handed weapons is up to your choice. Participants will be DPS only, meaning that you should ideally be using your best power armour and not tank armour, if it can be avoided.

All participants in each kill will have to be invited to a Liberation of Mazcab - Raids group via the grouping system. Everyone needs to mark themselves as ready in the group, then the leader will complete the group and teleport everyone to the Raids entrance. Enter through the portal and run northwest and jump down into the Pit of Trials. When all 10 members are present in the arena, the team leader will speak to the Goebie in the middle of the arena to initiate the fight.

After speaking to the Goebie, a counter of 39 Tuska-related monsters will appear at the top of the screen. From the four gongs on the walls of the arena, there will be several waves of melee Chargers and melee and ranged Airut that appear. Focus on killing the Airut and then the Chargers, taking special care to watch for whether you are being meleed or ranged by the Airut. These Airut are much stronger than normal, and you can be killed very quickly if they spec you. If you die during the Horde phase before you attack BM, you will not be eligible for loot! When the counter hits 21, the first pet Cormes will appear from the western gong and a designated pet tank will provoke its attention away from the DPS pile. While Cormes is alive, your priority is to kill the Airut, attack Cormes, and keep the Chargers alive. If these Chargers die before Cormes is dead, the next wave of Airut will appear and this phase will be more difficult on the team, with an increased risk of death. After Cormes dies, finish off the Chargers and continue killing the rest of the Airut waves until the counter hits 0 or 1. 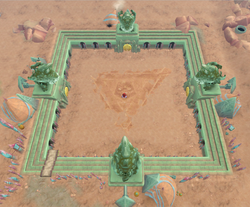 The Horde phase ends when all the Airut and Chargers are killed. At that time, Durzag and the second pet, either Tuz or Krar, will spawn at the north gong. Simultaneously, 24 Chargers will spawn in cages in the perimeter of the arena. DPSers will stay in the center of the arena, while a designated pet tank leads the pet to the northeast corner. The base tank will lead Durzag to the southeast corner, and two event helpers will release the 12 north Chargers and the 12 south Chargers. The Chargers will be lead to the southwest corner and killed quickly with AOEs, then those DPSers will return to the DPS pile in the center.

Randomly during this part of the fight, BM will throw out single moving dynamite-looking bombs that will approach a nearby player. Disarm these if you can, because they will hit 2k magic damage that will reset defence abilities to anyone nearby. He will also throw out caged Chargers near him that will be released on their own after a certain amount of time. Event helpers should release and kill these to prevent them from attacking the base tank.

BM will usually attack a few DPSers with ranged, so pray against ranged if you're receiving that damage. Other damage taken during this phase may come from pets, which can sometimes barge away from the pet tanks and to the base/backup base or the DPS pile. Try to keep your health up in case of a pet jumping to you, which can hit 4-5k with melee. Both pets can jump on you at the same time, as well. In the event that a pet jumps, do not stun the pet and do not stand between the pet and the pet tank so that they can lure the pet back to the northern corners. Because of the jumping pets, if you are not getting ranged attacks, then you may want to use deflect melee.

Lastly, he may do a flurry attack where he pulls in nearby DPSers and deals rapid, heavy melee damage. You can rotate Anticipation to counter this, though it happens randomly. Praying melee also helps with this if you are not getting ranged as well. If you do get pulled in, surge or escape out of it very quickly and then eat up. Regardless, continue DPSing Durzag until he reaches 750k health.

When Beastmaster Durzag's health hits 750k, he will enter his enraged phase and throw out one bomb for every person in the arena. It is extremely, extremely critical that you defuse these bombs! They will follow players and deal 2k magic damage and reset your defence abilities. Failing to defuse bombs will lead to things like this, which can lose a kill. At this point, get off BM and kill the pets, starting with Tuz and then Krar. Afterward, focus on killing BM, as this is the most difficult part of the fight. He will throw out bombs regularly, and also chargers which will barge to random nearby players if not released from their cages. Watch your health, help clear chargers, and defuse bombs while DPSing BM. The kill is over when his health reaches 0. After BM dies, you can loot his body and reroll once if you have a reroll token or have 5000 Goebie reputation. If you died during the kill, you can either loot from Fetcher outside the Raids entrance or re-enter the instance and loot from BM directly. Congratulations!

Unlike at most bosses, each person in the kill will receive their own independent loot. Therefore there will be no splitting of drops. It is also important to note that you must survive to the point where BM spawns, and the team must have a successful kill in order to receive loot. Loot received will include Teci, a currency to buy inferior Raids armour from the Armoursmith, and various resources.

There is also a chance to receive a Mazcab ability codex, a tradeable item that can unlock one of the four Raids abilities: Onslaught, Corruption Blast, Corruption Shot, and Storm Shards + Shatter. You may also receive superior (Achto) versions of the Raids gear, namely Tempest, Primeval, and Teralith.

Durzag can also drop two pets, Lil' Tuzzy and Diddyzag. Lil' Tuzzy can only be obtained on loot kills from BM's corpse or Fetcher and can be obtained from a reroll. It has a 1/512 drop chance with no threshold, and is not a requirement for Insane Final Boss. Diddyzag can be received regardless of loot, and is dropped upon Durzag's death rather than in the loot. You must be alive at the end of the kill to have a pet chance. The drop chance is 1/300 with a threshold of 1/60, and it is a requirement for Insane Final Boss.