Note: Prepare your kill count before the event begins. At 19:00 UTC we will enter the boss chambers with or without you so leave yourself enough time to kill all 40 monsters. See down below for more details.

The battle will be fought in an instance. Inside of the waiting room click the door, press join instance-> join existing battle --> UwS Kamikazi. There will be no password for this instance.

This is the HARD version of Commander Zilyana. Do not take any items you are not willing to lose.

Hard mode takes place in an instanced boss chamber. God Wars generals and minions are stronger (excluding Nex) and can use their special abilities from The World Wakes. High-value drops are more common. Completing the quest is not required to gain access to an instance.

There is a lobby to the boss chamber. Unlike in a non-instanced boss chamber, the gravestones of players who die are in the lobby, so players can reclaim their items somewhat more safely. However, gravestones in the lobby are unlikely to be blessed.

A list of which items protect and which don't can be found here. 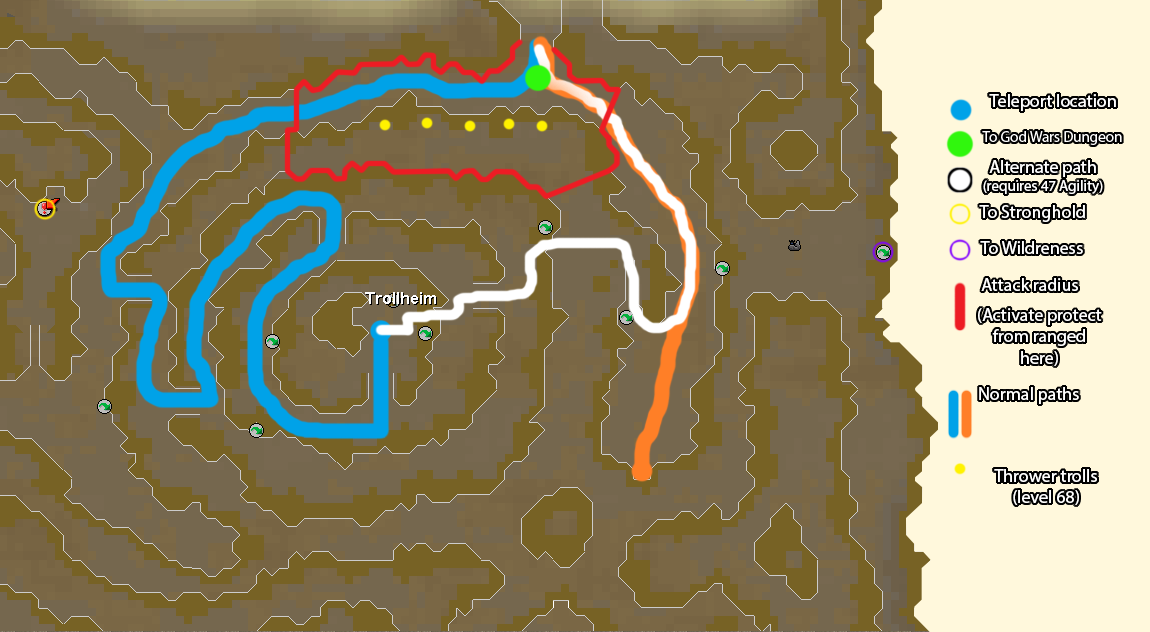 You will need a pair of Climbing boots if not utilizing the Trollheim Teleport spell.

Once you're inside go to the south east of the dungeon and climb down the rocks. In order to do this you need 70 Agility. If you succeed, you are now in Saradomin's Encampment, which is your best place for getting the killcount. It is recommended to kill the monsters which are weak to your combat style. Kill Spiritual Warriors and Knights of Saradomin when you are maging, and Spiritual Rangers when you are using melee to achieve the fastest killcount. Once you have achieved a killcount of 40, walk south and enter the waitingroom by clicking on the door. Do not leave this room, as your killcount will be drained once you enter the waitingarea. Note that hopping worlds does not reset your killcount, however leaving the dungeon entirely will. At 19:00 UTC the host UwS Kamikazi will create an instance for us to start the event. After 19:00 UTC you can join the friends chat UwS Kamikazi to participate in the event.

If you do not have Melee weapons of a greater tier, it is recommended to use Magic.

If you do not have Melee or Magic weapons of a greater tier, it is recommended to use Ranged.

The following is only a recommendation.

Unlike the normal battle, Commander Zilyana has two forms in Hard Mode. Her attacks are much more accurate and her defence is significantly higher. In her second form, Commander Zilyana may summon lightning around the room for every attack she does. The final blow must be done with an ultimate ability, otherwise she will heal back 12,500 lifepoints.

Zilyana has a fast attack speed, making her attacks both quick and accurate. During her second phase, she may summon lightning for every attack. The lightning bounces from tile to tile and deals rapid and heavy damage. Zilyana also has an attack that can stun her target.

The first phase is the same as the standard fight.

During the second phase, Anticipation or Freedom should be used to prevent stuns. Evading the lightning will help preserving food and to finish off Zilyana a damage inflicting Ultimate ability needs to be used (Deadshot, Omnipower, Tsunami, Unload, Incendiary Shot, Overpower, Massacre, Frenzy or Pulverize). Note that Incendiary Shot takes several seconds to hit, which may allow her to heal meanwhile so using this as the finishing blow is not recommended. If using Magic it is advised to use Sunshine to finish Zilyana as it allows the player to gain 10% adrenaline for each critical hit for 30 seconds as well as hitting all targets around Zilyana, being more useful than Omnipower. If using melee with a 2h weapon it is advised to use Pulverize as it will give the player 50% adrenaline for killing her, which is more useful than the other melee abilities.

Meleeing Zilyana is the most dangerous combat style usable as it can deal more damage than any other style. Beast of burden familiars are more important than combat or healing familiars due to the constant need to eat food. Compared to how hard hitting and accurate Zilyana is, Hard Mode will cause even the most experienced players with the best armour to be eating food almost every kill.

Once Zilyana's second form is dead, it is a good idea to use Anticipation, Freedom and Devotion (and if the player brings a shield, Resonance and Preparation) to stall adrenaline for the next kill, so Rapid Fire/Destroy/Asphyxiate/Assault and other thresholds can be used instantly.

Rapid Fire is best used at the start of the kill as moving around terminates it due to being a channeled ability. It is not recommended to use this on the second phase as Zilyana is more likely to hit harder and summon lightning tiles.

Metamorphosis is useful as it boosts the player's magic damage by 50% for 20 seconds even while moving.

Asphyxiate is best used at the start of the kill as moving around terminates it due to being a channeled ability. It is not recommended to use this on the second phase as Zilyana is more likely to hit harder and summon lightning tiles.

The player should attack Zilyana using the hit and run tactic to minimize damage taken. This is vital during the second phase as for every hit she does has a chance to summon lightning in the room. Debilitate is useful as it reduces Zilyana's damage inflicted by 50% for 10 seconds - meleers take more damage than any other style so this is recommended.

It is not advised to use Berserk as Zilyana can hit up to 2800 in a single hit while in Berserk mode, possibly leading to a short and deadly trip for the player.

Death is usually fairly bothersome, but not on this trip. If you should die, your grave may be blessed, giving you one hour to return and pick up your items. Obviously, any items you may be carrying that are not being protected by the gravestone will be lost, so plan what you will bring accordingly. Remember to bring everything you used to get to the GWD on the first trip as you will still need to make your way back to the GWD again.

For a full list of drops see: Commander Zilyana.