Pest Control is a minigame accessible from the Void Knights' Outpost, with its main objectives to destroy four monster-spawning portals while protecting the Void Knight from those monsters. It is still consistently popular for Void Knight equipment and raw experience. Completing one game is also a requirement to finish the quest Quiet Before The Swarm. After completing a game with enough participation, players receive 2-4 Void Knight commendation points depending on the difficulty level of the game.

From the Port Sarim lodestone, run east to the docks and click "Travel" on the Squire to get to the Outpost. From there, run south to the docks leading to the three landers, requiring different combat levels to enter. The landers from west to east are Veteran (100+), Intermediate (70+), and Novice (35+). 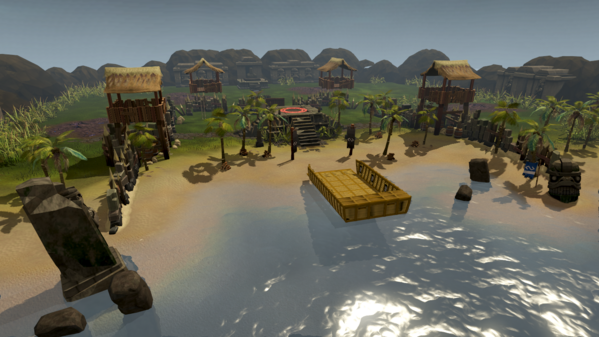 The Void Knight stands in the middle of the island on a raised platform and does not move. He has 20,000 lifepoints and is mainly targeted by Shifters, Torchers, and Defilers. Only a few players need to stay near him to kill the Shifters and keep the gates closed to protect him from the Torchers and Defilers from a distance. Monsters will damage the Knight, and the only way for him to heal is for portals to be destroyed.

There are four portals outside the walls - to the west, south-west, south-east, and east. When the game begins, all four portals will be shielded and not attackable, though they will actively spawn monsters. Shortly later, the Void Knight will announce that one of the portals' shield has dropped and can be attacked. Players should distribute themselves somewhat evenly among the portals initially because the first vulnerable portal is determined randomly. Once a portal is vulnerable, nearby players should attack it, destroy it, and move on to the other portals once the shields drop.

Each portal has a combat weakness; though, post-EoC it doesn't really matter what style a player uses.

Monsters, or pests, are spawned by the portals even when they are invulnerable. Kill the Shifters, Torchers, and Defilers that are posing a threat to the Void Knight first. Otherwise, it's easy to just kill any monster for participation points in the game.

Players will only receive commendation points if they participated in either dealing enough total damage to monsters or by repairing damaged barricades and gates. The minigame interface features the Void Knight's health, the player's participation points, and the time remaining as shown on the right. Attacking monsters is simple; just deal damage, and you don't have to get the kill.

Keeping the gates repaired is more important than the barricades. Both are usually destroyed by Splatters and Ravagers. To repair them, pick up logs between the Void Knight's platform and the lander and use them to repair the gates and keep them closed to protect the Knight. Gates will not open or close if they are badly damaged.

The starting point in each game

Players will receive 2, 3, or 4 Void Knight commendation points for completing a Novice, Intermediate, or Veteran game respectively. If Pest Control is the Spotlight minigame, players can also receive a decent number of Thaler as well. Additionally, at the end of every game there is a chance to receive a choice of Minigame armour boots - Trickster boots, Vanguard boots, or Battle-mage boots.

The main and generally most useful reward from Pest Control is the hybrid Void Knight equipment, with a set bonus offering increased accuracy. Players may also spend their points on experience, weapons, and resource packs. For full reward information, see the main article for Void Knight commendation points.