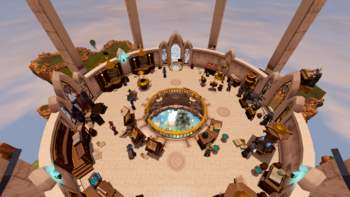 A view of the Runecrafting Guild.

The objective of the game is for players to move as many orbs corresponding to their team colour as they can to the altars, as well as keeping orbs of the opposite team away from the altar. The team with the most orbs that has gone into the altar when the timer runs out wins the round.

The main reward from this minigame is Runecrafting guild tokens, these can be exchanged for Runecrafter robes teleport tabs to different runecrafting altars and even the xp boosting Master runecrafter robes. Another reward is the essence gained after completing each altar that can be crafted for double runecrafting xp while in the minigame.